Ishaan Khatter's Beyond the Clouds, Abhay Deol's Naanu Ki Jaanu or Richa Chadha's Daas Dev - Which of These Five Movies are Actually Releasing on April 20?

So not five, but we have to do with just two movies this Friday, that is if High Jack doesn't make it. 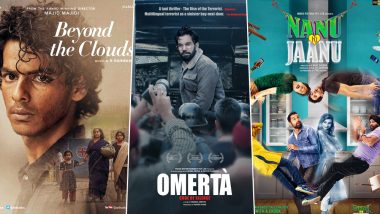 A couple of weeks back, we had done a feature on how the week of April 20 is going to be a headache for all the movie reviewers out there. For not one, but five Bollywood movies were supposed to come out on this date. None of them are exactly the crowd pleasing stuff like say a Tiger Zinda Hai or Baaghi 2, but they do have the potential to impress the critics and turn out to be the sleeper hits of the year.

So there is Iranian film-maker Majid Majidi's Indian debut Beyond the Clouds. The movie is much anticipated because it is the debut of Shahid Kapoor's younger brother Ishaan Khatter. Then there is Omerta where Rajkummar Rao and director Hansal Mehta join hands once again after the much praised Shahid, CityLights and Aligarh. The third movie, a supernatural comedy called Naanu Ki Jaanu, brings Abhay Deol and Patralekhaa back on the big screen after a gap of two years. Director Sudhir Mishra gives a new reverse spin to the tale of Devdas with Daas Dev, that stars Rahul Bhat, Richa Chadha and Aditi Rao Hydari. Finally there was High Jack, a spoof comedy that stars Sumeet Vyas and Sonalli Sehgal.

However, it looks like not all movies are going to make it to the April 20 release date, either due to screen issues or Censor troubles. In fact, only two movies might make it to the screens this Friday. So let's check out the status of the movies that were supposed to be releasing on April 20.

Releasing on April 20?: No. As per a report in Pinkvilla, the Hansal Mehta movie based on the life of international terrorist mastermind Omar Sheikh is having Censor troubles. The new release date is not determined yet.

Releasing on April 20?: No. Will now take a huge risk of clashing with Avengers: Infinity War on April 27. There is also a chance that Rajinikanth's Kaala might also come out on this date.

Releasing on April 20: Doubtful. Thanks to Censor Board's revisions and cuts, which the makers didn't approve of, the movie has been sent to revision committee. So this spoof comedy might come out only next week.

So not five, but we have to do with just two movies this Friday, that is if High Jack doesn't make it. So between Beyond the Clouds and Naanu Ki Jaanu, which movie are you rooting for?

(The above story first appeared on LatestLY on Apr 18, 2018 10:03 PM IST. For more news and updates on politics, world, sports, entertainment and lifestyle, log on to our website latestly.com).