Raid New Poster: Ajay Devgn and Saurabh Shukla Are Ready for a Face-Off, but Where is Ileana D'Cruz?

New Delhi [India], Feb. 17 (ANI): The new poster of Ajay Devgn starrer 'Raid' is out and sees majority of the star cast in it. 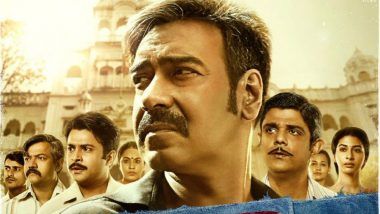 New Delhi, Feb. 17: The new poster of Ajay Devgn starrer 'Raid' is out and sees majority of the star cast in it. Divided into two parts, the upper half of the poster features Ajay Devgn with his team, while the lower half shows Saurabh Shukla, the negative lead, lounging on a bed, looking disgruntled. A large number of people, presumably the members of his on-screen family, is shown standing behind him.

The movie also stars Ileana D'Cruz in the pivotal role. The period drama is directed by Raj Kumar Gupta of 'Aamir' and 'No One Killed Jessica' fame. Set in the early 1980s with Lucknow as the background, the film revolves around a true incident of the longest raid in history. The movie is slated to release on March 16, 2018.