Dilip Kumar Dies at 98: Did You Know the Legend Still Holds This Amazing Guinness World Record That He Shares With Shah Rukh Khan?

Dilip Kumar was honoured with the Padma Bhushan in 1991 and the Dadasaheb Phalke Award in 1994. The actor's state funeral is supposed to take place on July 7 at 5 PM in Mumbai. 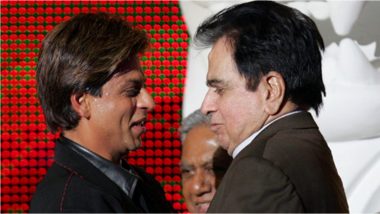 The world is mourning, as the iconic star Dilip Kumar breathed his last on Wednesday (July 7) morning. Known as the Tragedy King of Bollywood, the legend passed away at the age of 98 and is survived by his wife, veteran actress Saira Banu. However, little did you know that his original name was Mohammed Yusuf Khan. Dilipji entertained fans for more than five decades... and there was and never will be another Dilip Kumar for sure. One of the most interesting anecdotes from his career is that he has received eight Filmfare awards in the Best Actor category for which he also holds a Guinness World Record. Yes, you read that right! Dilip Kumar Passes Away: Andaz, Devdas, Mughal-E-Azam - 10 Superhit Classics Of The Legendary Actor To Remember Him By!

Dilip Kumar has won the black lady eight times and has also been bestowed upon with Lifetime Achievement in a career spanning more than 50 years. Taking you back in time, it was for his film Daag (1953), that the actor won his first Filmfare. Ahead as audience and critics got charmed by his acting, he won Filmfare as Best Actor for Azaad in 1955, Devdas in 1956, Naya Daur in 1957, Kohinoor in 1960, Leader in 1964, Ram Aur Shyam in 1967, and Shakti in 1982. FYI, Dilip shares the record with none other than Shah Rukh Khan who also has 8 Filmfares for Best Actor. Dilip Kumar’s Death: Amitabh Bachchan Mourns Actor’s Death, Says ‘An Epic Era Has Drawn Curtains’.

Baazigar, Dilwale Dulhania Le Jayenge, Kuch Kuch Hota Hai, My Name is Khan, are the name of a few films that SRK has won Filmfares for.

Coming back to Dilip Kumar, he was not just an actor but an emotion for his fans. He was indeed a trendsetter when we talk about his acting style, which inspired many minds. Apart from the celebs, even India's Prime Minister, Narendra Modi mourned Dilip Kumar's demise and described and penned, "he would be remembered as a cinematic legend." May his soul RIP.

(The above story first appeared on LatestLY on Jul 07, 2021 12:15 PM IST. For more news and updates on politics, world, sports, entertainment and lifestyle, log on to our website latestly.com).