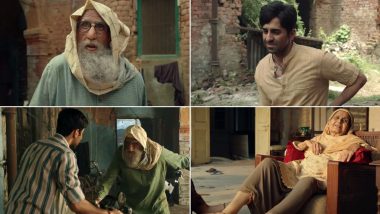 Amitabh Bachchan and Ayushmann Khurrana's Gulabo Sitabo is the first Bollywood release to have an OTT premiere after the coronavirus outbreak. The film directed by Shoojit Sircar will release on Amazon Prime on June 12 and going by its trailer, it comes across as a hilarious ride with two annoying characters at the forefront. While Amitabh plays a landlord, Ayushmann is his tenant and the duo is always at loggerheads with each other. The movie's first song, Jootam Phenk further gives us an insight into their funny camaraderie and it's totally worth your time. Gulabo Sitabo Trailer: Twitterati Is Already Impressed With Amitabh Bachchan and Ayushmann Khurrana's Fun Act! (Read Tweets).

The peppy song composed by Abhishek Arora is sung by Piyush Mishra. It's a situational song that revolves around Sircar's protagonists and their constant tussle to beat each other. The characters are amusing in itself and the song successfully highlights the same quality. The movie has been shot in the charismatic city of Lucknow and the song occasionally gives us a peek into this magnificent and old-style architecture. Watch out for their camaraderie 'cos it's certainly going to hit your expectations out of the ballpark. From Akshay Kumar’s Sooryavanshi to Ranbir Kapoor’s Brahmastra, 7 Films of 2020 That Should NOT Follow Gulabo Sitabo’s OTT Strategy and Must Release in Theatres – Here’s Why.

Check Out the Song

The decision by the maker of Gulabo Sitabo to ditch its theatrical release stirred a debate with multiplex chains voicing their displeasure and disappointment over it. However, producers insist it was their only way out. While Vidya Balan's Shakuntala Devi was quick to follow their suit, more medium-scale budget movies are expected to join the list of direct-to-web releases.

(The above story first appeared on LatestLY on May 27, 2020 01:08 PM IST. For more news and updates on politics, world, sports, entertainment and lifestyle, log on to our website latestly.com).