Heropanti 2: Is Tiger Shroff-Tara Sutaria’s Film a Remake of Adivi Sesh’s Goodachari? Here’s How It Might Benefit the Bollywood Star!

Remaking a Telugu movie has always worked in the favour of Tiger Shroff, and his box office history is a huge proof of that. And if reports are true, then Goodachari offers him a sleek platform to take over the box office again. 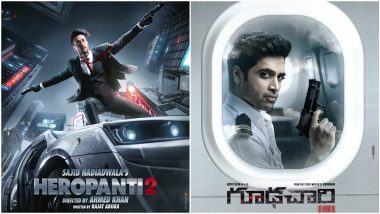 Among the slew of Bollywood releases announced after Maharashtra lifted lockdown curbs (from October 22), one exciting film that sees an Eid release in 2022 is Heropanti 2. Directed by Ahmed Khan, the movie stars Tiger Shroff and Tara Sutaria in the lead, and is said to be a sleek action thriller. Heropanti would be Tiger's first Eid release, a slot usually reserved by one of his father's good friends, Salman Khan. Heropanti 2 Funny Memes and Jokes Take Over the Internet as Twitterati Troll It For Copying John Wick.

Although Heropanti 2 is made to be a sequel to Tiger's debut film, the 2014 movie Heropanti, it shares no connection with that film. The first film was the remake of the 2008 Allu Arjun-starrer Parugu. And if the rumour mills are to be believed, Heropanti 2 is also a remake of another popular Telugu film, the 2018 smash hit Goodachari.

Watch the Trailer of Goodachari:

A spy thriller, Goodachari had Adivi Sesh and Sobhita Dhulipala in the lead, and is directed by Sashi Kiran Tikka. Goodachari itself was influenced by Matthew Vaughn's black comic spy thriller, The Kingsman. Adivi Sesh, who plays a RAW recruitee in the movie, had also contributed in the screenplay. The movie was a big hit with both the critics and the audiences. Adivi Sesh: I Will Take OTT Projects if the Story Is Truly Brilliant and Beautiful.

If you want to check out Goodachari, the film is streaming on Amazon Prime Video. The movie also stars Prakash Raj, Madhu Shalini, Vennela Kishore and Jagapathi Babu. There is also a sequel planned for the film, with Adivi Sesh returning to reprise his role.

If the reports of Heropanti 2 being a remake of Goodachari are true, then this would be Tiger Shroff's fourth remake of a Telugu movie, after Heropanti (Parugu), Baaghi (Varsham), and Baaghi 2 (Kshanam). Baaghi 3 was inspired by the Tamil film Vettai, while War was inspired by a couple of Hollywood films, most notably the name-alike Jet Li-starrer War. Interesting to note here is that all his remake movies have been successes at the box office (Baaghi 3's BO collections were cut short by the lockdown), while his original movies like A Flying Jatt, Munna Michael and Student of the Year 2 had underperformed. So box-office wise, it might benefit Tiger's luck. Not to mention having a cool storyline also has its benefits. Also let's not forget Tiger has already made his huge fanbase based on his martial arts skills, and he has the Eid factor in favour of him!

(The above story first appeared on LatestLY on Sep 28, 2021 02:59 PM IST. For more news and updates on politics, world, sports, entertainment and lifestyle, log on to our website latestly.com).