Heropanti 2: Tara Sutaria And Tiger Shroff Team Up Once Again After Student Of The Year 2!

Tara Sutaria had made her Bollywood debut opposite Tiger Shroff with the film Student of the Year 2 that had released in 2019. 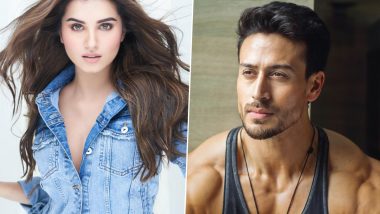 Tara Sutaria had made her Bollywood debut opposite Tiger Shroff with the film Student of the Year 2 (SOTY2) that had released in 2019. The duo’s onscreen chemistry in SOTY2 was a huge hit and now fans would be delighted to know that Tara and Tiger are teaming up once again! The official announcement on Heropanti 2’sfemale lead has been made. Tara Sutaria is being paired opposite Tiger Shroff in this Ahmed Khan directorial. Tiger Shroff to Begin Sajid Nadiadwala’s Baaghi 4 and Heropanti 2 Shoot Soon (Read Tweet).

Heropanti 2 is bankrolled by Sajid Nadiadwala under the banner of Nadiadwala Grandson Entertainment (NGE). This upcoming project marks Tara Sutara’s second film with the popular production house. The romantic drama titled Tadap, in which Tara and debutant Ahan Shetty would be seen in the lead, is also been produced by the same banner. Tara, who is excited to be a part of Heropanti 2, shared a post that read, “Reunited with my favourites! Thank you Sajid Sir for believing in me.. Heropanti 2, here we go!!! P.S. – Can’t think of a better way to kick-start birthday month!” Tiger Shroff Shares His First Look From Heropanti 2, and His Fans Cannot Keep Calm! (Read Tweets).

NGE welcomed the beauty onboard with a post that read, “Welcome Back The beautiful & starlet @TaraSutaria to star in #SajidNadiadwala’s #Heropanti2 opposite @iTIGERSHROFF @khan_ahmedasas @WardaNadiadwala.” Heropanti 2, which is expected to go on floors soon, is a sequel to the 2014 romantic action drama. Heropanti had marked the acting debut of Tiger Shroff in Bollywood. Fans would be excited to watch him in the sequel. The makers of Heropanti 2 are reportedly planning to release the film next year.

(The above story first appeared on LatestLY on Oct 30, 2020 12:55 PM IST. For more news and updates on politics, world, sports, entertainment and lifestyle, log on to our website latestly.com).