Karan Johar Birthday Special: 9 Facts About The Director Which We Bet You Had No Clue About 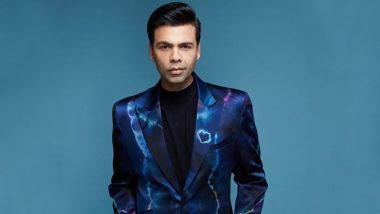 Like him or hate him, but you can't ignore him. That's what is Karan Johar. You may have zillions of issues with the way he is always there on TV or keeps making movies with star kids, or for just being him. But you have to admit that he is perhaps the most real that any person in Bollywood has ever been. Be it his love for Shah Rukh Khan and his family or his love for cinema, Karan wears his heart on his sleeves. That's the reason why Kuch Kuch Hota Hai and Kabhi Khushi Kabhie Gham are pure love. Karan Johar’s Kids Yash and Roohi Have Got a Foolproof Plan to ‘Bag’ Themselves Up and Escape the Lockdown (Watch Video)

You would assume that you know what there is to know about Karan Johar. Well, surprise, surprise! We give you 9 unknown facts about the director. Some of these might just surprise you.

#The name is Rahul Kumar Johar

The names Raj and Rahul became quite famous because of Aditya Chopra and Karan Johar's movies. So it didn't come as a shock to us when we found out, KJo was born as Rahul Kumar Johar! He revealed in one of the episodes of Koffee With Karan Season 6, "When I was born my name was Rahul. I was Rahul Kumar Johar for 12 days. On my Janam Patri, it still says Rahul Kumar Johar." His mother had a dream and that's why she changed his name. So his full name is Karan Kumar Johar.

Karan Johar is the first filmmaker to be chosen as a jury member for Miss World Pagent 2006.

Karan had a thing for the alphabet K as he believed in numerology. So you have Kuch Kuch Hota Hai, Kabhi Khushi Kabhie Gham, Kal Ho Na Ho, Kabhi Alvida Kehna. But when he watched Lage Raho Munnabhai, he decided to drop his obsession with the alphabet. He told TOI about this saying that the film had such an effect on him.

Kabhi Alvida Naa Kehna happened because of the Hollywood film Before Sunrise. He informed IANS many years back, "I party a lot and have seen many relationships upfront. To be more specific, I saw After Sunrise in London, in which ex-lovers meet and it seems they might end up having an affair. I heard conversations of real life couples. I read a self-help book called Fighting For Your Marriage. I met a marriage counsellor in Delhi. So, I have done plenty of emotional research. Of course, a story, however real, has to be told in a fictional and entertaining way."

Karan Johar has his Oscar speech ready in case one day his dream becomes true of walking the red carpet of the Academy Awards and win too. He had told Hindustan Times, "I want to walk the red carpet at the Oscars. I am in awe of the ceremony and winning an Oscar would be the most magical moment of my life. I want to make that speech and hold that trophy and say, ‘This is for you India’. That’s the line I have rehearsed for God knows how long. But that has to be for a Hindi language film."

Karan Johar had claimed that Suhana and Aryan, Shah Rukh Khan's kids, are part of his will. Speaking to a daily, he had said, "Aryan and Suhana are the gold members of my will. Then I have Alia, Sid and Varun. I love all of them. Every time Varun, Sid and Alia appear even on a magazine cover, I feel like a proud parent. But there has to come a time when everyone has to be left on their own. I want them to be masters of their own choices now." Now we don't if it was the classic KJo sarcasm or he actually meant it. Karan Johar Clarifies over Suhana Khan and Asim Riaz’s Bollywood Debut with Student of the Year 3

#The French degree or DDLJ?

Karan's teacher from Mumbai's HR Commerce College Dr Indu Shahani had revealed to Rediff that he got glorious recommendations from Professors when he applied to a French University for his Master's. But then one day, he returned all the books. Sahani recollected, "One day -- I remember it was the latter half of 1993 -- Karan came to me and returned all the books he had borrowed for his studies. He told me he was joining films and not going to France. 'I am assisting Aditya Chopra on this movie called Dilwale Dulhaniya Le Jayenge. I won't need these books any more', he told me. I was surprised because this was slightly unforeseen but I was happy nonetheless. I told him 'The kind of discipline that you have Karan, it will see you through in any profession that you choose'."

Apparently, Yash Johar wanted Karan to be an actor and had even decided to launch him But fate had other plans.

(The above story first appeared on LatestLY on May 25, 2020 10:10 AM IST. For more news and updates on politics, world, sports, entertainment and lifestyle, log on to our website latestly.com).