Karan Johar Legit Gets Termed as a 'Monkey' and No Brownie Points For Guessing Who Said That! (Watch Video)

Karan Johar has been entertaining his fans with other such videos featuring his children, amid the lockdown period. 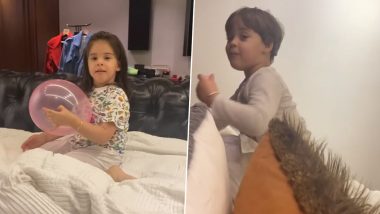 Celebrities are finding it difficult to fill up the void created into their lives due to COVID-19 lockdown. They have been quite used to be in a tight-packed schedule which has now gone for a toss due to lockdown. The quarantine and social-distancing norms have instead got them get accustomed to the new norm of posting consistently on social media about their day-to-day lives. Bollywood filmmaker, Karan Johar too has started lockdown series of his own where he posts short videos of his twin kids, Yash and Rpohi. In the latest one, they legit called their dad 'a monkey.' As Karan Johar Interacts With Son Yash, Daughter Roohi Cutely Video-Bombs Them!.

Following his daily video routine, KJo asked his daughter, Roohi what she was doing. In the meantime, son Yash tried to jump on the bed from behind. Karan called him a 'little monkey' but Roohi promptly said 'He is only Yash.'

On the other hand, Yash said that he should be called as 'Yash Bhaiyya' while Roohi said that she should be called as 'Roohi didi.' However, when Karan asked who he is, Yash ended up calling him a 'monkey!' He shared the same with the caption, "Ok I have a new name now! #lockdownwiththejohars", with monkey emojis inserted. Check out the video below. Yash And Roohi Take A Tour Of Karan Johar's Bathroom And Find Something 'Useless' (Watch Video).

Ok I have a new name now! #lockdownwiththejohars 🙈🙈🙈

Karan Johar has been entertaining his fans with other such videos featuring his children. On the work front, he is supposed to helm a period drama named Takht. Stay tuned with us for more updates on starry lives during quarantine.

(The above story first appeared on LatestLY on May 18, 2020 05:59 PM IST. For more news and updates on politics, world, sports, entertainment and lifestyle, log on to our website latestly.com).