Katrina Kaif on Her Instagram Page: 'You’re Not Seeing the Moments of Insecurity and Unhappiness' 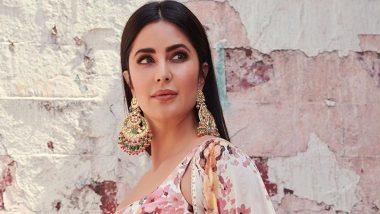 Katrina Kaif was a little apprehensive of joining social media. Once upon a time she was one of the rare actresses who was not on any social media. But one fine day, she blessed us with her Instagram page. Somehow she has struck a beautiful balance between being a private person and gaining social media clout. Her videos are entertainment - she cooks, dances, pranks her fans, pulls the leg of other celebs. And what not. In a recent interview with BBC Asia, she opened up about her decision to join social media. "I didn't feel like I was being represented, or a very small side of me was being represented, and that side was too small," she said. Katrina Kaif Clocks 40 Million Followers on Instagram, Chronicles Her Journey on the Gram With a Memorable Video!

But don't think that her life is a bed of roses. She added, "You’re not seeing the behind-the-scenes, the other moments. Am I also guilty of that? Yes, because it’s a visual medium. If you scroll through my Insta page, you’re seeing the highlights of my life. You’re not seeing the in-between moments of doubt, you’re not seeing the moments of insecurity, you’re not seeing the moments of unhappiness."
And that is the general vibe of how social media should be perceived. None of the social media influencers you follow are you showing you the dark of the moon.
Katrina added, "You’re seeing a showreel of highlights."
On the work front, Katrina will be next seen in Sooryavanshi alongside Akshay Kumar. One of the highlights of the film is that the two actors will recreate the iconic "Tip Tip Barsa Pani" song. Katrina is also preparing to star in Ali Abbas Zafar's female superhero film that will start a universe.

(The above story first appeared on LatestLY on Jul 13, 2020 05:49 PM IST. For more news and updates on politics, world, sports, entertainment and lifestyle, log on to our website latestly.com).