Actress Kirti Kulhari delivered an insightful and interactive session on the topic Acting for the Camera at the closing ceremony of the Himalayan Film Festival in Ladakh. 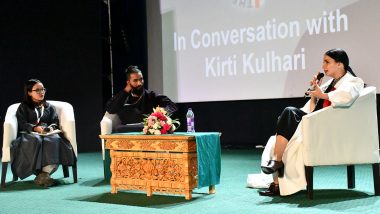 Actress Kirti Kulhari delivered an insightful and interactive session on the topic Acting for the Camera at the closing ceremony of the Himalayan Film Festival in Ladakh. The actress talked about a wide range of topics from her experience of doing theatre, her choice of films, and her journey so far as an actor. When asked to throw light on the socially relevant films she has done, Kirti said: "Cinema is a very powerful medium to bring about change and that's the reason I am doing what I'm doing. For me being an actor is all about bringing a change. As an actor I'm here to talk about things that matter to me and what I feel matters for the greater good of society." Human: Kirti Kulhari Opens Up About Her Role in Disney+ Hotstar’s Medical Drama, Says ‘It Is a New Representation of Me’.

She added: "For me what's important is that every individual, whether male or female, is being empowered. The film 'Pink' for example is about consent. I know when I do a film like 'Pink', even if it makes 10 people think about the idea of consent, we have won. Every individual's thinking matters." Kulhari also talked about the rise in opportunities because of OTT: "I never got my due before OTT. I'm very happy now to be here, at a time when so many new faces, such new talent is entering the industry not just actors but also directors and writers." Kirti Kulhari Says Shaadisthan Motivated Her to Learn More About Music

Stressing more on writers she emphasized: "Writers are now finally getting their due. I'm from the industry but I know how we treat our writers. We don't give them their due. It's frustrating, annoying and it makes you angry because you are here to do something that you believe in. And now with these changing times, they are finally getting their due, it's high time." Kirti Kulhari also visited PictureTime's inflatable theatre where the films of the festival were screened. The first Himalayan Film Festival was wrapped up on Tuesday night. The event that hosted a wide range of films from the Himalayan region also played host to enriching and informative conversation sessions and master classes.

(The above story first appeared on LatestLY on Sep 29, 2021 06:03 PM IST. For more news and updates on politics, world, sports, entertainment and lifestyle, log on to our website latestly.com).