Manoj Bajpayee on Nepotism Row: 'As An Industry We Celebrate Mediocrity'

While A list stars such have maintained their silence amid this debate, there are a few actors from the industry who have spoken about the way Bollywood functions. Recently, actor Manoj Bajpayee in an interview with Wion addressed the debate. 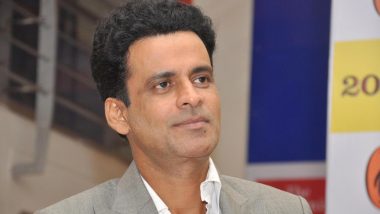 Sushant Singh Rajput's tragic death has been too much to take for everyone. From industry folks to his fans, everyone was left disheartened with the news of his death. In the light of the actor's death, several industry issues such as the treatment of actors who are cosidered to be 'outsiders' arose and once again the nepotism debate has come to the fore. While A list stars such have maintained their silence amid this debate, there are a few actors from the industry who have spoken about the way Bollywood functions. Recently, actor Manoj Bajpayee in an interview with Wion, addressed the debate. Bhonsle Trailer: Another Impressive Manoj Bajpayee Performance in A Hard-Hitting Film on the Way!

As someone who has himself struggled his way up, Manoj spoke about the nepotism debate and started off by saying, "Let me start with this, the world is not fair. I have been saying this since 20 years that as an industry we celebrate mediocrity. Forget about industry, as a nation we celebrate mediocrity. Something is lacking somewhere -- in our thought process, our value system. When we see talent, we immediately want to ignore or push it away. This is the value system of ours which is so deplorable.”

Reflecting on his journey, the actor said, " I am a thick-skinned person. The more you abuse me, the more powerful I become in my resolve. I come from a different place, I am the son of a different mother. When I think of how I survived, sometimes, I feel like it's a miracle."

Netizens have taken the nepotism debate to another level and their online bullying towards star kids has even forced the likes of Sonakshi Sinha to deactivate her Twitter account. Sonam Kapoor also chose to restrict her comments section amid this uproar after she was badly trolled for her Father's day post.

(The above story first appeared on LatestLY on Jun 24, 2020 07:32 PM IST. For more news and updates on politics, world, sports, entertainment and lifestyle, log on to our website latestly.com).