Maska is a film written and directed by Neeraj Udhwani.It stars Manisha Koirala, Jaaved Jaaferi, Nikita Dutta, Shirley Setia and Prit Kamani in the lead roles. Maska is available for streaming on Netflix on 27 March, 2020. 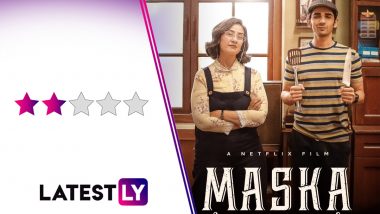 Maska Movie Review: Rumi (Prit Kamani) has a legacy on his head. He is to be a maskawallah just like his father and take over Cafe Rustom, his family's Irani Cafe in downtown Mumbai, that has been established since 1920, something his mother Diana Irani (Manisha Koirala) is eagerly waiting to happen. But Rumi has other plans - he wants to be an actor. He goes to acting classes, gets in a relationship with a fellow struggler Mallika (Nikita Dutta) and leaves home to be in a live-in relationship with her. Netflix’s Maska Trailer: Manisha Koirala and Prit Kamani’s Onscreen Mother-Son Duo Bonding Is Simply ‘Butter-Sweet’ (Watch Video).

A golden opportunity arrives for Rumi when he is offered the lead role in a film, only that he has to procure Rs 5 crore to fund the film. Determined to sell his restaurant to get the money, Rumi first has to convince his mother. But is it easy to let off a glorious legacy for an uncertain future, especially when a PYT fellow Parsi Persis (Shirley Sethia) is trying to make his cafe gain more popularity?

If you have been to CST and Colaba, you would have come across the handful of Irani cafes in the quaint Victorian buildings. The sweet smell of keema pav and Irani chai that waft in the air when you throng these Parsian eateries is something you sorely miss during these Corona times. Maska, directed by Neeraj Udhwani, attempts to be a sweet little ode to both the Parsi community and these old-world cafes.

There are some interesting threads in the film, like the protagonist choosing to between the legacy he is stuck with or the one he wants to make. Or Irani cafes struggling to strive against the more polished-looking franchises. The charming Parsi vibe and the pleasing acts by Manisha Koirala and Jaaved Jaaferi (appearing as Rumi's dead father's ghost) do give a distinct likeable flavour to the film. The ultimate message about preserving the heritage is also something that could connect to the viewer.

There are some humorous scenes that manage to eke out some smiles. Scenes that have Rumi converse with his dead father iare quite heartwarming. Also not forgettable is his attempt to go 'method' in his audition that results him going Full Monty. And let's not forget the dirty take on the children's poem, 'Johnny Johnny Yes Papa'!

Sadly, the dish doesn't come out as delectable as the delicious bun maskas made in the film. That's mostly due the irritating predictability of the premise that makes it so easy to connect the dots. You know how Rumi's arc will work out, including his half-baked romantic triangle with Mallika and Persis. Maska's step-motherly treatment to Mallika's character, showing once again Bollywood's inherent disdain to female characters who has strong ambitions. Or maybe, like its Parsi characters, Maska wants to keep the love within the community!

The thing that left me underwhelmed the most is that in spending way too much in the romance, Maska doesn't strengthen the emotional bond between Rumi and Diana. Which should have been the film's backbone and nothing else.

Watch The Trailer of Maska here:

There is also Prit Kamani's performance, that feels lacking. Quite likeable in 2018's underrated Hum Chaar, Prit's casting is good as the confused Parsi boy who thinks he is a decent actor, but isn't. Unfortunately, the last part of the previous sentence also applies to his act outside his auditions, especially in the more intense scenes. His character also comes across as vaguely irksome, and I am not exactly sure you will come out liking him in the end.

At times, you really can't help but compare it the far more superior, Malayalam film Ustad Hotel, starring Dulquer Salmaan and Thilakan. The Dulqer Salmaan-starrer also had a similar premise about a young man who discovers the beauty of his grandfather's eatery legacy, even though he seeks a career abroad. The kind of emotional connect you with the characters and their storylines is what actually lack in Maska.

- Doesn't Evolve Beyond A Feel-Good Watch

Maska, streaming on Netflix, is sweet enough to be a decent one-time-watch, but the taste leaves your senses completely once the film is over!

(The above story first appeared on LatestLY on Mar 27, 2020 08:55 PM IST. For more news and updates on politics, world, sports, entertainment and lifestyle, log on to our website latestly.com).