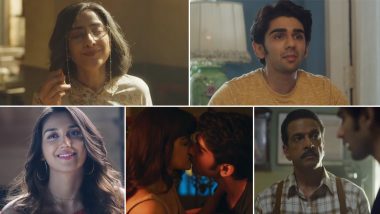 We’re going to get treated with another amazing Netflix film – Maska. Like the name, this film celebrates the beautiful Parsi culture. Through Manisha Koirala and Prit Kamani, who plays the mother and son duo in Maska, you’ll get to watch a 'butter-sweet' story. Netflix dropped the trailer of Maska on March 12, and we bet, it will bring a smile on your face. It shows how Rumi (Prit) aspires to become an actor and not a Maskawaala, as his mother expects him to become. You’ll see Manisha not only as a doting mother in this film, but also as a proud Irani café owner – Café Rustom. Maska: Manisha Koirala's Netflix Film to Stream on March 27.

The opening of the trailer shows Jaaved Jaaferi (Manisha Koirala’s onscreen husband), who is a Maskawaala. The family runs an Irani Café, popularly known for the Rustom Bun Maska. While the parents expect their son to take forward the legacy, Rumi’s ambition is to become a Bollywood actor and not to miss, also wants to live in Andheri. He starts giving auditions to become an actor, and that’s when he comes across Mallika (Nikita Dutta). And while he is in the run of giving auditions, he meets another gorgeous lady (Shirley Setia), a photographer who wants to make a Coffee Table Book on Irani Cafés.

Watch The Trailer Of Maska Below:

Maska is directed by Neeraj Udhwani. This amazing film will stream on Netflix on March 27. Are you ready to watch this Maska with some bun maska?

(The above story first appeared on LatestLY on Mar 12, 2020 02:56 PM IST. For more news and updates on politics, world, sports, entertainment and lifestyle, log on to our website latestly.com).