Neha Dhupia Gets Love From Husband Angad Bedi As He Says 'Sun Meri Baat, It's My Choice' in a Mushy Post! (View Pics) 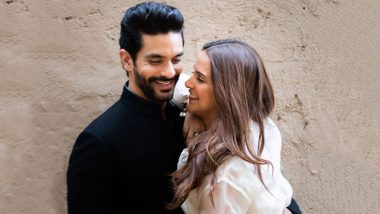 Neha Dhupia has been at the receiving end of incessant trolling since a few days. Her statement in an episode of MTV Roadies Revolution got her into serious trouble. A video clip from the show went viral where she slammed a contestant for slapping his girlfriend for cheating him with five boyfriends. She is seen saying 'It's her choice.' This had the netizens criticizing her for promoting infidelity. After she recently released a statement defending her stand, her husband-actor Angad Bedi came out in her support too. Now, he went one more step ahead and posted the pictures of '5 girlfriends' and captioned it in the words of his wife! Neha Dhupia Issues Clarification on Roadies Controversy After Trolls Harass Her Family ( Read Statement).

In the pictures posted by The Inside Edge actor, he says, "Sun MERI baat.. here are my 5 girlfriends!!!! Ukhad lo jo ukhad na hai!!!! @nehadhupia #itsmychoice." If you have watched the clip already, these words will definitely ring a bell! These are the words that Neha was quoted saying in the clip and Angad turned them into a sweet caption of his. He shared five beautiful pictures Neha with him, proudly calling her as his '5 girlfriends.' Take a look at the post.

In her long statement defending her words in the video, the Chup Chup Ke actress wrote, "What the girl did is a choice she made which is a moral choice regardless of someone, man or woman... adultery is a moral choice. Cheating is not something I stand for, and it is unfortunate that I have been misrepresented for the same... but what I do stand for is women's safety." Bollywood actors like Taapsee Pannu, Karan Johar, Ayushmann Khurrana, Sonam Kapoor came out in support of the actress.

(The above story first appeared on LatestLY on Mar 16, 2020 12:02 PM IST. For more news and updates on politics, world, sports, entertainment and lifestyle, log on to our website latestly.com).