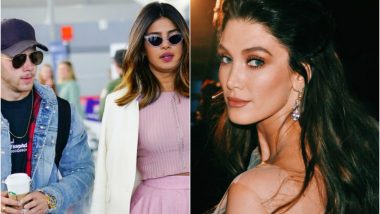 Nick Jonas and Priyanka Chopra are making heads turn with their constant appearances together as a couple. The duo is reported to be in a relationship and are going stronger with each passing day. While the netizens are drawing unicorns and rainbows alongside their names, there are a few who are not happy with it. One of them is Nick’s ex-girlfriend Delta Goodrem. Since the speculations are rife about PC’s relationship with the singing star, his former girlfriend is reportedly ‘heartbroken’ after Nick confessed his serious feelings for the ‘Baywatch’ hottie.

As reported in Woman’s Day, Nick and Delta are supposed to work together on ‘The Voice Australia.’ This ignited Delta’s hopes of reconciling with Jonas. However, he confessed to her that ‘things with Priyanka are getting serious’. A source revealed, “Delta was left heartbroken. She feels she can't compete with a hottie from Hollywood, whose best friends are royals." Here she was referring to desi girl’s bonding with Meghan Markle, the royal figure now.

Meanwhile, Nick’s brother Kevin opened up about Chopra to an entertainment portal saying, “You’re gonna have to ask Nick about that. But we’ve met in the past. She is super awesome but at the same time that’s Nick’s thing and he can say what he wants to say.”

On the other hand, the 35-year-old Bollywood diva will be returning to India for next Bollywood film, after a long span. She will be seen in Ali Abbas Zafar’s ‘Bharat’ opposite Salman Khan, along with Disha Patani. What are your thoughts on PC-Nick’s dating rumors? Tell us in the comments section below.

(The above story first appeared on LatestLY on Jun 19, 2018 10:06 AM IST. For more news and updates on politics, world, sports, entertainment and lifestyle, log on to our website latestly.com).