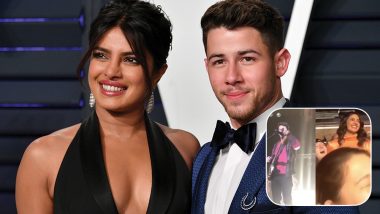 Priyanka Chopra attended her first ever Jonas Brothers concert last night, and cheered for her hubby Nick. The fans of the couple are happier than Priyanka herself. The videos and pictures from the event are flooding the internet right now. We have already told you about the video in which Priyanka picked up a bra thrown by a fan at Nick and said she'd pass along the 'message'. Now, the internet is already swooning over another video overloaded with love and cuteness. In this one, Nick has a message for his lovely wife and a very special way to make it reach her.

In the middle of his set, seeing his wife loudly cheering for him, Nick decided to say 'I love you' to her. He, then, proceeded to say those three words to Priyanka in sign language and we think it is absolutely adorable.

Check out the video of Nick signing I love you to Priyanka in sign language below:

Priyanka and Nick are going happy and strong, as evident from the video. So, all the rumours about their divorce only after four months of marriage can be put to rest.

On the work front, the horizon is well lit for Priyanka. Her recently-released YouTube special, If I Could Tell You Just One Thing, has been well-received by the world. Avengers: Endgame director Joe Russo revealed during his press tour in India that he is in talks with the actress to star in a project. Priyanka is also in talks with Vishal Bhardwaj and Sanjay Leela Bhansali for their movies. She is also developing a feature with Barry Levinson and the subject is Maa Anand Sheela. Priyanka will also be seen in the Bollywood film, The Sky is Pink, this year.

(The above story first appeared on LatestLY on Apr 01, 2019 07:08 PM IST. For more news and updates on politics, world, sports, entertainment and lifestyle, log on to our website latestly.com).