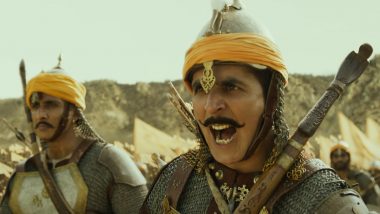 Bollywood star Akshay Kumar reveals how he wore costumes weighing 6 kilos to play the titular role in Prithviraj. Akshay came to promote his film with co-actor Manushi Chhillar and director Chandraprakash Dwivedi. He shares how he had to wear clothes that were heavy, but not heavier in comparison to actual clothes worn by real warriors of history. Samrat Prithviraj: YRF Changes Akshay Kumar, Manushi Chhillar’s Prithviraj Title Ahead of Its Release

The actor says: "The clothes I have worn in 'Prithviraj' weighed around 5-6 or 4-5 kilos. Yet, the actual warriors of our past, Samrat Prithviraj Chauhan, Shivaji Maharaj, would wear clothes that would weigh around 35-40 kilos." Prithviraj Is Now Samrat Prithviraj: Akshay Kumar, Manushi Chhillar’s Period Drama Gets a New Title.

"On top of that they would carry these big swords. They were the real warriors. And they would fight wearing heavy attire," he adds. The Kapil Sharma Show airs on Sony Entertainment Television.

(The above story first appeared on LatestLY on May 28, 2022 07:40 PM IST. For more news and updates on politics, world, sports, entertainment and lifestyle, log on to our website latestly.com).