Looks like there will be tears in the eyes of the viewers when this song from Paltan will be played in the end-credits. 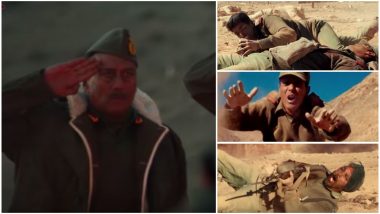 If you have seen all the previous JP Dutta war movies as Border and LOC Kargil, there is one major common trend in both the films. There will be a final song that will pay tribute to all the dead heroes who lost their lives in the war shown in the films. In Border, the song was Mere Dushman Mere Bhai, while in LOC Kargil, it was Ek Saathi Aur Bhi. Paltan, JP Dutta's latest war movie, is believed to be following the same trend, going by the latest song that has been revealed.

Main Zinda Hoon is the new song from the film that is about the valour of the soldiers who have died to protect the honour of the motherland. The song is composed by Anu Malik, the regular collaborator of JP Dutta, with some poignant lyrics by Javed Akhtar. Main Zinda Hoon is beautifully sung by Sonu Nigam, and going by the lyrics and the visuals, looks to be the last song in the film.

Before we get into that, watch the video first -

As you are aware, Paltan is based on 1967 Nathu La and Cho La clashes along the Sikkim border after 1962 Sino-Indian War. So the film's main leads, Jackie Shroff, Arjun Rampal, Sonu Sood, Harshvardhan Rane, Luv Sinha, Siddhant Kapoor and Gurmeet Choudhary play real-soldiers, many of whom were martyred during the war. The song shows glimpses of the final fates of the characters played by Arjun, Harshvardhan, Siddhant and Gurmeet, it seems.

Looks like there will be tears in the eyes of the viewers when this song from Paltan will be played in the end credits. Just like what happened with Border and the underrated LOC Kargil.

(The above story first appeared on LatestLY on Aug 31, 2018 09:25 PM IST. For more news and updates on politics, world, sports, entertainment and lifestyle, log on to our website latestly.com).