The movie is all set to release on September 7. 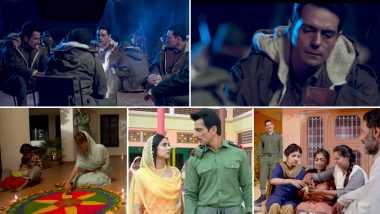 If you are familiar with the music of the previous JP Dutta war films, Border and LOC Kargil, you would know there are some common elements. Like for example, Anu Malik would have scored the music (like he always does for JP Dutta movies) with lyrics by Javed Akhtar (another JP Dutta frequent collaborator). Sonu Nigam would have sung at least one song, and there will a track about how soldiers are pining for their beloved. JP Dutt's latest war film, Paltan will follow all these rules with its latest song, Raat Kitni.

Raat Kitni is about how the lead characters in the film are remembering their loved ones back home, while at the battle camp. We also get to see which actor is paired with which female lead. So Arjun Rampal's character is married to Esha Gupta's, while Sonu Sood is with Sonal Chauhan. Similarly, Gurmeet Chaudhary is married to TV actress Dipika Kakkar, while Harshvardhan Rane is thinking about his beloved, played by Monica Gill. Luv Sinha's character is missing his family. Strangely, Siddhant Kapoor is missing in the song; has his character been killed before the song happens?

Paltan also stars Jackie Shroff and is based on 1967 Nathu La and Cho La clashes along the Sikkim border after 1962 Sino-Indian War. The movie is all set to release on September 7.

(The above story first appeared on LatestLY on Aug 21, 2018 01:47 PM IST. For more news and updates on politics, world, sports, entertainment and lifestyle, log on to our website latestly.com).