Actor Mohit Baghel Dies At 26 Due to Cancer; Parineeti Chopra Mourns the Loss of Her Jabariya Jodi Co-Star (View Tweet)

Mohit Baghel was part of Bollywoood films like Jabariya Jodi and Ready. He made his debut into the showbiz world with Chote Miya. Check it out. 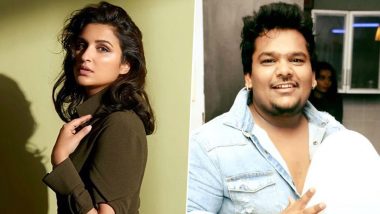 Must say, 2020 is turning out to be one of the worst years ever. As daily, atleast one death news of a Bollywood or a Television artiste makes it to the web. And the latest one is of actor Mohit Baghel who has passed away due to cancer. The deceased had started his career in the world of glitz and glam with the comedy show, Chote Miya and was also part of Sidharth Malhotra-Parineeti Chopra film Jabariya Jodi. Mourning the loss of Mohit, Parineeti took to Twitter and expressed her sadness over the tragic news. She retweeted a post shared by Raaj Shaandilyaa. Sasural Simar Ka Fame Ashiesh Roy Admitted to ICU, Actor Requests Fans on Facebook to Provide Financial Help.

For the unversed, Raaj happens to be the director and writer of hit comedy series like Comedy Nights With Kapil and Comedy Circus. 'One of the nicesttt people to work with! Happy, positive and motivated always. Love you Mohit. RIP,' Pari wrote in her tweet. FYI, Raaj had also roped in Mohit for his next. Indeed, this piece of news is really sad and more power to the deceased's near and dear ones. Manmeet Grewal Commits Suicide Due To Depression Caused By The Lockdown.

One of the nicesttt people to work with! Happy, positive and motivated always. Love you Mohit. RIP🤎 #JabariyaJodi https://t.co/b0Gr6GpCxg

Mohit was quite a popular face in Bollywood and apart from Jabariya Jodi, he had also worked in Salman Khan starrer Ready. The young actor was born on June 7, 1993, and was 27 years of age. He really left for the heavenly abode at a very early stage in his life. May his soul rest in peace.

(The above story first appeared on LatestLY on May 23, 2020 03:18 PM IST. For more news and updates on politics, world, sports, entertainment and lifestyle, log on to our website latestly.com).