Pathan: Did John Abraham Join Shah Rukh Khan On The Sets of The Film? (View Pic)

Pathan is getting interesting by the day. As if the reunion of Shah Rukh Khan and Deepika Padukone isn't enough, John Abraham as an antagonist makes it quite thrilling. The actor has now joined the sets of the film. 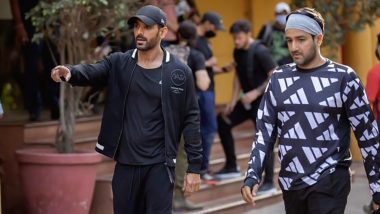 The last time we saw Shah Rukh Khan and John Abraham together was perhaps for a Pepsi commercial where a young guy kept calling them uncle. They have been part of many movies but haven't shared screens together.  So when Pathan became the talk of the town with John and Deepika in it, we were very excited. Shah Rukh sneakily went to Dubai and shot a few action scenes there. Now we have an on-the-set picture of John Abraham as well. How do we know it's Pathan? Well, John was with Siddharth Anand, who is directing the film.  Pathan: From Salman Khan’s Cameo to Its Release Date, How Shah Rukh Khan’s Spy Thriller Is Making Headlines Without ‘Officially’ Existing! (LatestLY Exclusive)

Quite obviously, this picture makes us extremely excited about the film now. Check out John Abraham from the sets of the film...

#JohnAbraham From the Sets Of #Pathan Today 🔥🔥🔥 Finally He Join the Sets. #ShahRukhKhan #siddharthanand pic.twitter.com/1b2sNPrn3c

John is apparently playing an antagonist in the film. Pathan will release sometime in 2022 and our guess is, SRK will try to target Diwali or Eid. The cast itself made Pathan quite interesting even when there's no official announcement about anything from Yash Raj Films' side. That's what we call a masterstroke.

(The above story first appeared on LatestLY on Apr 06, 2021 06:44 PM IST. For more news and updates on politics, world, sports, entertainment and lifestyle, log on to our website latestly.com).