There were a lot of hopes attached to Salman Khan and Disha Patani's entertainer Radhe, but going by the reviews, it feels like the movie is a sure-cut disappointment. Read on. 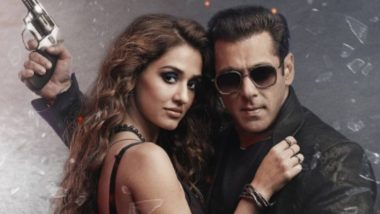 After a hiatus, Salman Khan is back with Radhe: Your Most Wanted Bhai. The actioner is helmed by Prabhu Deva and sees Disha Patani opposite the superstar. The movie released on Eid 2021 (May 13) worldwide in theatres (overseas and a few screens in India) as well as on ZEE5’s ZEEPlex and other DTH services. However, is Salman's latest film worth it? Well, early reviews of the film are out, and honestly, they do not look great. After reading a few reviews online, we feel that Radhe is a disappointment. Here, check out some reviews below. Watch Radhe Online: Here’s How You Can Watch Salman Khan-Disha Patani’s Film on ZEEPlex From the Comfort of Your Home!

Hindustan Times is not pleased with the flick and writes, "Radhe is nothing but a collection of action sequences piled upon each other as Disha's tight dresses, some dance numbers, and goons saying 'apun' a lot act as fillers. The action scenes are average right until the climax, which is when things get much worse."

With a hilarious headline, Firstpost pens, "There is absolutely nothing in this film to recommend it. Nothing. Not even an atom of the novelty that made Wanted and Dabangg attractive to audiences beyond Salman’s hard-core fan base. The actor does a version of his jiggle-the-belt move from Dabangg somewhere along the way in Radhe."

News18 adds, "Radhe is a collage of high-pitched songs and slow-motion shots that made us cringe even five years back. You need to have a high appetite for Khan’s antics to enjoy this one."

The Hindu mentions, "Radhe’s story is all over the place and you hardly care for what’s happening on screen. Dance numbers are thrown in, including the much-publicised ‘Seeti Maar’ (originally composed for the Telugu film DJ). Radhe is dreary and listless, with no attempt to do anything innovative within the purview of star-led masala entertainers."

Not just the above critics, even the author at LatestLY has given the movie one star. A part of our review says, "Radhe: Your Most Wanted Bhai will make Salman Khan fans happy. I really do. But you people deserve better. Salman Khan can do better, seriously. Just Radhe is not that movie. To read the full review, click here. Stay tuned!

(The above story first appeared on LatestLY on May 13, 2021 06:12 PM IST. For more news and updates on politics, world, sports, entertainment and lifestyle, log on to our website latestly.com).