Let's see if Priyanka will give him his due credit! 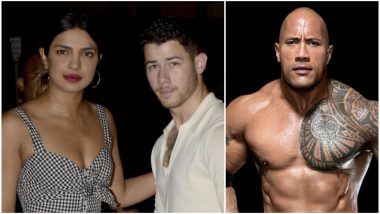 Love is in the air for actress Priyanka Chopra and singer-actor Nick Jonas. Even though they haven't publicly come out and declared their love for each other, they have made it quite obvious without saying anything. Priyanka and Nick were seen spotted at many places, holding hands, and Nick even flew down to Mumbai to see her mother. They went onto to Goa, along with Priyanka's brother Siddharth and cousin Parineeti for a vacation, before both returned to the US.

Priyanka Chopra is back in India along to shoot for her movie with Salman Khan, Bharat, and also reading the script for her next, The Sky is Pink (?). However, the media still can't get over their obsession with this love story, as the look for clued in Jonas and Priyanka's Instagram accounts. And if you are one of those who is rooting this love story, then you have one man to thanks for. Or at least that's what Dwayne Johnson wants you to do.

So what's the connection between The Rock and the love-birds? While Priyanka Chopra and Nick Jonas have never worked together, they have done a movie with Dwayne Johnson. Priyanka played the main antagonist in Baywatch, which Nick Jonas had a supporting role in Jumanji. So when Entertainment Tonight asked The Rock if he played Cupid for the couple, this is what he had to say, "Are they happy? Well then, I take credit. Baywatch and Jumanji. I did it, yes. If they're happy."

Let's see if Priyanka will give him his due credit!

(The above story first appeared on LatestLY on Jul 09, 2018 09:23 PM IST. For more news and updates on politics, world, sports, entertainment and lifestyle, log on to our website latestly.com).