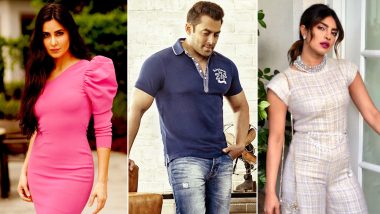 There are ample of reasons why people are excited for Salman Khan starrer Bharat. Firstly, it's a SALMAN KHAN film, a reason enough to pull all the bhai fans to the theatre. Secondly, Bollywood-Hollywood icon, Priyanka Chopra is returning back to Hindi films with this Ali Abbas Zafar directorial. Now, there is one more reason to add to this list- Katrina Kaif. There were rumors that Kat will be seen in this Hindi adaptation of Korean film 'Ode to my father'. However, after PC was locked for the project, the rumors died a natural death. Surprisingly, Kaif might actually be a part of this period drama!

According to a report in Bollywood Hungama, the Tiger Zinda Hai actress has an effective role in this flick despite the other female leads like Piggy Chops and Disha Patani. A source told the portal, "It’s not known how or where she will be found in the plot. But Katrina is definitely part of Bharat in a very significant way."

The Quantico actress has worked with Zafar earlier in Gunday. On the other hand, Kat has a special bonding with him owing to their films together like 'Mere Brother ki Dulhan', 'Ek Tha Tiger', 'Tiger Zinda Hai'. Also, she is a very close friend of Dabangg Khan. It won't be startling if she gets an entry into this film. The source added, "He is close to both the stunners and will ensure they are given ample space in Bharat although it would be an out-and-out Salman film."

It will be for the first time that both the gorgeous ladies will sharing the screen space and we cannot wait to know more about her role, if the reports are true! Meanwhile, Katrina will also be next seen in Shah Rukh Khan starrer 'Zero' and Aamir Khan starrer 'Thugs of Hindostan'.

(The above story first appeared on LatestLY on Jul 09, 2018 12:24 PM IST. For more news and updates on politics, world, sports, entertainment and lifestyle, log on to our website latestly.com).