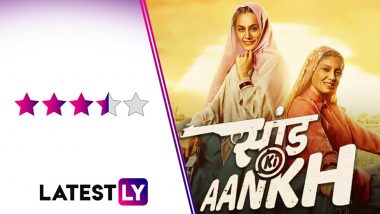 Saand Ki Aankh Movie Review:  The domestic world of Chandro (Bhumi Pednekar) and Prakashi (Taapsee Pannu) Tomar is established in the first scene. As the camera swirls around the Tomar household, we see the men comfortably perched on their jute beds. The women around them bring food, water and slippers to where they are sitting, another lady fills their pipes with coals, while the males listen to a request of a wife wanting to go to a faraway temple. Why? So that she can pray for her husband's long life. The scene is so framed that the men are in the bull's eye or Saand Ki Aankh, and it is their patriarchy that needs to be shot right in the centre. Saand Ki Aankh, Starring Taapsee Pannu and Bhumi Pednekar, Gets Tax Exemption in Rajasthan.

The Tomars, who are based in Baghpat, UP,  reminded me of the lion family. The male lion earns the 'King of the Jungle' tag when all it does is laze around the whole day, while it is the lioness who does the most hunting and taking care of the cubs.

But two lionesses in the Tomar family, Chandro and Prakashi, are not ready to take things down after decades of suppression and birthing their many children. Even that temple visit is a ruse for them to enter a shooting competition, a series of which soon makes them famous as Shooter Dadis in the media. Only the men in their house are clueless about it!

We see the first sign of their revolt, when in 1975, they secretly oust their husbands and other menfolk to government authorities as part of Sanjay Gandhi's infamous forced vasectomy drive. It doesn't work the way they want, but that scene gave the hint that Chandro and Prakashi can become Mother India if they want to.

All they need was a gun in their hands and that's what Doctor (Viineet Kumar), a local who is scouting for talent in his village for shooting competitions, give them in 1999. They don't need to shoot down a Birju, but they need to bring down the years of oppression that men in their family, like their patriarch Rattan Singh (Prakash Jha), have been putting them through.

As you might be aware, Chandro and Prakashi Tomar are real people, who in their late '60s, impressed the country with their incredible shooting skills and precision. So let's first address the elephant in the room. Just as the trailers suggested, look-wise, Taapsee and Bhumi aren't very convincing in their daadi avatars. The makeup is inconsistent, especially for Taapsee, and there are moments where they hardly look the age they were supposed to portray. But then, there are other things that truly make up for it. Parineeti Chopra Comments on Saand Ki Aankh's Ageism Debate, Says it's an Actor's Job to Mould Themselves into Real-Life Personalities.

Like, how director Tushar Hiranandani did the smart thing in making Saand Ki Aankh a feel-good fare, using effective humour to win over the viewers. Tushar, making his directorial debut, is a popular screenplaywright, but here, he lets Balwinder Singh Janjua do the honours of penning the script. Janjua's screenplay is sprinkled with delightful moments, that, even if it doesn't always make you pump your fists in the air, is bound to at least leave a smile on your face.

The best part about Saand Ki Aankh was that it isn't designed to work as a sports film, but a delightful revolt against sexism and misogyny, but without the violence. Even if guns are involved.

I found it interesting how the patriarch uses the fear of rape to control the women in his house, while the men in the fold can do almost anything they want. It's a technique that has been used in almost every household to control what the women should wear or go. Even the daadis themselves find it strange when the husband of another woman praises his wife in public and think there is something wrong with him. It's like a novelty for them, just like the fork they are seen cradling minutes later.

The daadis don't enter the shooting contests for themselves, they do it so that they can encourage their kids, Seema and Shefali, become shooters themselves, get government jobs and have better lives than what they have. Every other adulation they got in the process was just collateral, it's as if they never knew what it is to live for themselves.

We are never given a proper reason how the daadis have such accuracy, though it is hinted at their suppression and the work the men makes them do, that they have a better grasp and more control of their nerves. It makes me wonder, if there are more women in the Tomar household that can shoot as good as them.

It isn't that Saand Ki Aankh doesn't have its share of issues. There is a predictable pattern in how the movie makes its way to the conclusion. We can guess that there will be a couple of verbal outbursts towards the ends from the leads. We know that Chandro and Prakashi's elder sister-in-law, who is always seen veiled and mute throughout, will never be so in a crucial turning moment. The character of Chandro's son, Balbir (Shaad Randhawa), who becomes a part of the narrative at a crucial moment, is an underwritten part, and doesn't have much of an impact. The same goes for the husbands of Chandro and Prakashi, who apart from being stooges to Rattan Singh, aren't given much of a persona. Also, the behaviour of certain minor characters is on the verge of being caricaturish.

But to every negative that I mentioned here, there are more positives too, that make you ignore the flaws for a moment and enjoy what Saand Ki Aankh has to offer you. Like, there is a scene where the daadis participate for the first time in a shooting competition, and people uproariously laugh at them, even though it is a senior citizens contest. It is a very cliched take, but the way how Tushar ends the scene on a very high note will make you clap for the movie.

Similarly, the scene where the daadis go to a royal mansion, where they are honoured as chief guests, try to eke laughs out of their ignorance of everything face. But once again, the sequence ends in such a winsome manner that you really forget how it was played till then.

That's the beauty of Saand Ki Aankh. If there is an average scene or a bad plotline played out, you can be guaranteed that there is a touching moment that washes away most of the sins. How can you not smile when Prakashi creates a makeshift strobe light just so that the women of Tomar household can enjoy the party scene in their house?

Or not tear up, when they poignantly describe how their first foray outside the hamlet also meant their first stab at being their free selves, where they got to enjoy new sights, new sounds. Try not to clap, when the daadis question the status quo of their houses, in what is their first outbursts against their useless husbands. So even though the film runs at a hefty two and a half hours long, you hardly feel the length, save for a couple of occasions here and there.

A special mention to Jagdeep Sidhu's dialogues, they are highly effective in most of the scenes. The songs composed by the talented Vishal Mishra blend well with the narrative, with "Udta Teetar" and "Baby Gold" being the pick of the lot.

The leads of Saand Ki Aankh may not be in complete control of how convincing they are in their old makeup, but their performances are very much delightful. Bhumi Pednekar is a tad more convincing, playing the more controlled Chandro Tomar, whose bits of broken English speech is cutesy. Taapsee, as the slightly rebellious Prakashi, has more bumps with her looks, but she compensates that with a charming performance. What's better is that these two actresses have incredible chemistry between themselves, which gives Saand Ki Aankh quite an edge.  Watch them dance in celebration together and then try to find out if you are smiling despite your self. That camaraderie is also what makes that emotional climax work so well as a sequence.

Viineet, currently one of my favourite actors in the industry, continues his trend of delivering top-notch performances. Observe him when he bursts into happy tears after the daadis win their contest. And then compare it to a scene later in the film where he is seen silently letting out tears of anguish and sadness. That contrast there shows a mark of his versatility.

Director Prakash Jha is very convincing as the patriarch who loves to rule with an iron fist. Sara Arjun and Pritha Bakshi are good as Shefali and Seema respectively, Sara also acting as the narrator of the film. The rest of the cast are adequate in their roles.

- The Chemistry Between The Leads

- Some Usage of Cliches

Saand Ki Aankh, as a film, doesn't exactly hit the bulls' eye, but it certainly leaves you with a feeling of doing so. Some glaring flaws may not put the movie in the same league as a Chak De India or an Iqbal. But rest assured, by the time the end credits show the real Shooter Daadis, you would be clapping hard for them!

(The above story first appeared on LatestLY on Oct 21, 2019 10:14 AM IST. For more news and updates on politics, world, sports, entertainment and lifestyle, log on to our website latestly.com).