The film depicts how the two female shooting champions, thereafter, start encouraging village girls to take up sports and also help in generating self-confidence among them. Saand Ki Aankh deals with women empowerment and the changes in social mindset. 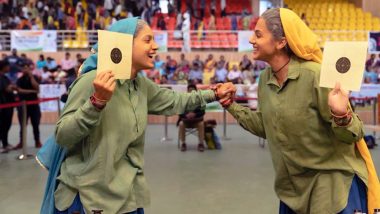 Jaipur, October 10: Rajasthan Chief Minister Ashok Gehlot on Thursday approved the proposal for giving state Goods and Services Tax (GST) exemption to the film Saand Ki Aankh during its exhibition in cinema halls and multiplexes in the state. The film is based on the real story of two elderly women, Chandro Tomar (86) and Prakashi Tomar (81), from village Johri in Uttar Pradesh who struggle hard to learn the art of shooting. Their earnest efforts help them achieve remarkable success in the sport with both going on to win numerous medals in competitions.

It stars Taapsee Pannu and Bhumi Pednekar and is scheduled for released on October 25. Directed by Tushar Hiranandani and produced by Anurag Kashyap, the film also features Vineet Singh and Prakash Jha.

The Rajasthan government has earlier allowed state GST exemption for the film "Super-30" based on the theme of free coaching provided to students from poor backgrounds to prepare for the IIT exams, as well as for "Padman", which promotes menstrual hygiene.

(The above story first appeared on LatestLY on Oct 10, 2019 10:00 PM IST. For more news and updates on politics, world, sports, entertainment and lifestyle, log on to our website latestly.com).