Varun Dhawan has been the talk of the town for being roped in for a new project as the lead in Sajid Nadiadwala's Sanki. Reportedly, the actor will play the role of a physically challenged cop. Check out the full story. 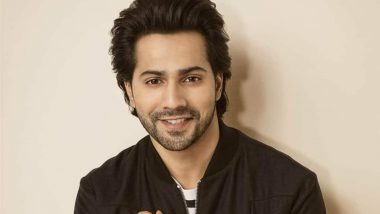 Bollywood actor Varun Dhawan who was recently in the news for getting married to his longtime girlfriend Natasha Dalal and shooting for his film, Bhediya, has once again grabbed the attention. However, this time, the young lad has been the talk of the town for being roped in for a new project as the lead in Sajid Nadiadwala's Sanki. As per a report in Bollywood Hungama, the actor will play the role of a physically challenged cop. Yes, this is definitely a piece of exciting news for his fans. Bhediya: Varun Dhawan and Kriti Sanon in Amar Kaushik’s Horror-Comedy, Film To Release on April 14 2022!

That's not it, as the report further also hints that the movie is a remake of Tamil thriller Dhuruvangal Pathinaaru and will star Parineeti Chopra opposite Dhawan. "Sajid Nadiadwala had bought the official rights to the superhit Tamil thriller Dhuruvangal Pathinaaru. Sanki is a remake of the same film. They are adapting the screenplay to suit the pan-India platform," a source told the portal.

The source added, "It's a cleverly crafted thriller, where Varun Dhawan plays a top cop who loses his leg during one of the investigations. It's challenging for Varun because he plays a character battling a physical handicap for the first time in his career." Varun Dhawan to star in Sajid Nadiadwala's Sanki? Fans Trend #VarunKaActionInSANKI on Twitter.

Well, if the rumour is true and the deal is sealed then we will surely see Varun in a never seen before avatar. The report also mentioned that Sanki will mostly go on floors later this year after the actor wraps work on Bhediya and Jug Jugg Jeeyo. Stay tuned!

(The above story first appeared on LatestLY on Mar 26, 2021 06:30 PM IST. For more news and updates on politics, world, sports, entertainment and lifestyle, log on to our website latestly.com).