Shah Rukh Khan is busy shooting for Zero, that is directed by Aanand L Rai. 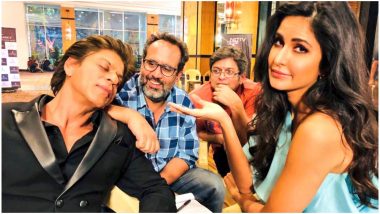 Shah Rukh Khan might be a light sleeper; he has himself confessed that he doesn't sleep for more than four hours or so. But most of his sleeping definitely goes in the morning hours, so like many of us, Shah Rukh Khan is definitely  not an early bird. So if imagine, if you are called early to work on a shift, then there is high chance that you will spend the rest of the day sleepy. This is what the unit of SRK's next movie had to bear him in the state when they called him for an early schedule.

Shah Rukh Khan is busy shooting for Zero, that is directed by Aanand L Rai. During an early schedule of the movie, Shah Rukh Khan posts a picture from the set where he is seen dozing while his co-star Katrina Kaif and director Rai are looking bemused. In his tweet, he mentions that his sleep serves them 'right' for calling him early. Also note, he 'appointed' Katrina Kaif as his media manager.

When the company is sooo scintillating & exciting that u can’t keep ur eyes open! Serves them right for calling me to early morning shoots for #Zero ( Pic courtesy: Katrina my media manager ) pic.twitter.com/eNnzchfVV0

In Zero, Shah Rukh Khan is playing a vertically challenged man who is in love with a movie star, played by Katrina Kaif. Anushka Sharma, who is seen as the main lead in this week's horror flick Pari, is the other heroine. The movie also boasts of a lineup of star cameos, like Salman Khan, Kajol, Rani Mukerji, Karisma Kapoor, Juhi Chawla, Deepika Padukone, Alia Bhatt etc. It will also mark the last screen appearance of the late actress Sridevi, who passed away last Saturday.

Zero is scheduled to release on December 21.

(The above story first appeared on LatestLY on Mar 03, 2018 04:19 PM IST. For more news and updates on politics, world, sports, entertainment and lifestyle, log on to our website latestly.com).