Kareena Kapoor Khan on Monday shared the first picture of her second child, a baby boy, to mark International Women's Day. The actress and her husband, actor Saif Ali Khan, welcomed their child on February 21. 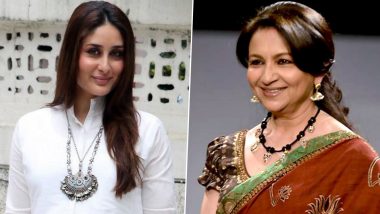 Kareena Kapoor Khan welcomed a baby boy with Saif Ali Khan in February 2021. The actress has been busy spending time with the little munchkin but has yet not revealed the name of the little one. Fans have been eagerly waiting to know the little baby's name but if reports are to be believed the actress is still waiting for her mother-in-law to arrive and meet the little one. It is said that the couple wants the grandmothers to name the newborn and are waiting for Sharmila Tagore to arrive in order to decide upon a name. Kareena Kapoor Khan, All Glammed Up and Gorgeous but Totally Engrossed in Her Phone in This Throwback Boomerang Video!

But even after 2 months of his arrival, Sharmila has not yet met the baby. Opening up about the same, Kareena said, “The fact that this whole year has gone by and we have actually not been able to spend as much time as we used to. You have not been able to see the new addition to our family but we are just waiting to actually come together, spend some time with you. I always get nervous when people ask me to talk about you. Because when it comes to talking about such an icon and legend, what is left to say?”

She went on to say, “ The whole world knows that my mother-in-law, who I am lucky to call my mother-in-law, is one of the most elegant and graceful women to have walked the earth. But I have been lucky to know her deeper than that, which is that she is warm, she is loving, caring and someone who is always there not just for her children but her grandchildren, daughter-in-law. Somebody who has always been so inclusive of me, made me feel part of this family."

“I've deep deep respect and regard for you and I think the fact that this whole year has gone by when we have actually not been able to spend as much time as we did before the pandemic. You've not been able to see the little one, the new addition in the family. We've waiting to actually come together as a family, spend some time together with you," she concluded. Kareena Kapoor Khan Pens Adorable Birthday Post for ‘BFF’ Amrita Arora, Says ‘Have Your Back till Eternity’.

Kareena Kapoor Khan on Monday shared the first picture of her second child, a baby boy, to mark International Women's Day. The actress and her husband, actor Saif Ali Khan, welcomed their child on February 21. The 40-year-old actor delivered her first child, son Taimur Ali Khan on December 20, 2016. The four-year-old toddler is an Internet sensation and is followed by the paparazzi round-the-clock.

(The above story first appeared on LatestLY on Apr 14, 2021 10:35 PM IST. For more news and updates on politics, world, sports, entertainment and lifestyle, log on to our website latestly.com).