Sidharth Malhotra, Shraddha Kapoor’s Ek Villain Gets a Lovely Tribute in the Acclaimed Netflix Film The Half of It That You Shouldn’t Miss (Watch Video)

Directed by Alice Wu, The Half Of It had released on the streaming platform on May 1, 2020. A coming-of-age drama that deals with friendship and acceptance with queer themes, The Half of It had received critical acclaim and had also won the Founders Award for Best Narrative Feature at the 2020 Tribeca Film Festival. 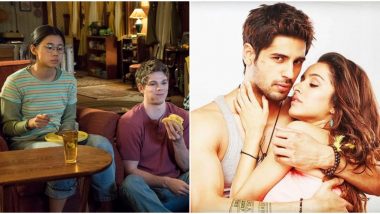 Remember Ek Villain? Of course, you do! Some of you might be still humming the melodious "Galliyan" track, composed by Ankit Tiwari, still now! The remake of the Korean thriller I Saw The Devil, Ek Villain was directed by Mohit Suri, and starred Sidharth Malhotra and Shraddha Kapoor in the lead, along with Riteish Deshmukh in his first negative role. Thanks to the songs and the interesting casting and premise, Ek Villain was big hit at the box office when it released in 2014. Ek Villain 2: Aditya Roy Kapur and Mohit Suri Discussing Their Film on Video Call Amid COVID-19 Lockdown.

So what's the connection between Ek Villain and the Netflix film The Half Of It? Directed by Alice Wu, The Half Of It had released on the streaming platform on May 1, 2020. A coming-of-age drama that deals with friendship and acceptance with queer themes, The Half of It had received critical acclaim and had also won the Founders Award for Best Narrative Feature at the 2020 Tribeca Film Festival.

Watch The Trailer of The Half of It:

Returning to the Ek Villain connection (SPOILERS AHEAD), in the movie, there is a scene where the leads, played by Leah Lewis and Daniel Diemer, who are friends and watching a film, and it turns out to be Ek Villain. The scene they are watching is the one where Sid's character is running besides the train in which Shraddha's character is travelling and and asking her to hold his hand and be with him, before the train speeds up and she breaks into tears.

Here's the Scene to rack up your memory:

As they watch this scene, the girl asks why the hero is acting like a moron and running besides the train, and wonders if the girl is leaving him because he is an idiot. When her friend points out that even Shraddha's character is sad, she calls her a moron too. End of scene.

Okay, before Siddharth and Shraddha's fans rile up, that's not the end of the story. The scene is recreated later in a beautiful, emotional payoff in the leads' track towards the end of the film.

In the finale, as the guy leaves the girl, who is an emotional state, in the train, we later find him running besides the train in an effort to cheer her up. The girl laughs through her tears and even calls him a moron, while her confused co-passengers are oblivious of the fact that they are just recreating a scene from a Hindi film, most of them are not aware of!

Watch both the scenes below:

Pretty sure, all the Ek Villain fans are already checking out The Half of It on Netflix right now!

(The above story first appeared on LatestLY on May 14, 2020 09:27 PM IST. For more news and updates on politics, world, sports, entertainment and lifestyle, log on to our website latestly.com).

Comments
Tags:
Ek Villain Netflix Riteish Deshmukh Shraddha Kapoor Sidharth Malhotra The Half Of It The Half Of It netflix
Comments
You might also like