Stree Makers Dinesh Vijan and Raj-DK Sort Out their Differences Amicably; All Copyright and Intellectual Property Rights to the Movie Will be Solely Owned by the Former

Their differences were solved amicably. However, from hereon all the copyright and intellectual property rights in and to the film including the derivates rights thereof will now be owned by Dinesh Vijan's Maddock Films only. 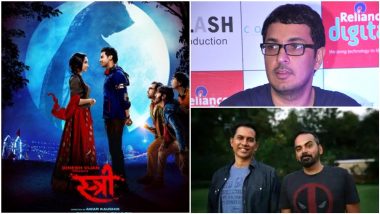 The reason why the makers of Stree haven't announced a sequel yet was the long pending brawl between producer Dinesh Vijan and co-producers Raj & DK. The issue was regarding the profit percentage that Vijan was supposed to share with the duo but he refused to do so. Post his refusal, The Family Man makers were compelled to take the legal course. However, the said issue has now been sorted out by the concerned parties and they have issued a joint statement to confirm the same. Janhvi Kapoor's Roohi-Afza and Shraddha Kapoor's Stree to be a Part of Dinesh Vijan's Horror Universe - Read Details.

Their differences were solved amicably. However, from hereon all the copyright and intellectual property rights in and to the film including the derivates rights thereof will now be owned by Dinesh Vijan's Maddock Films only. With their differences being sort out, we can now expect the makers to go forward with their supposed sequel. With so many horror comedies already in the pipeline, it would be excited to see yet another in Stree 2.

Check Out the Statement

Coming to their long-pending issue, a source close to Raj & DK in his earlier interaction had said, "As per the contract, Dinesh Vijan was supposed to share 50 per cent of the profits with Raj-DK, if and when the film became profitable. Stree earned more than a Rs 100 crores at the Indian box office. Vijan seems to have got second thoughts over the profit-sharing when he saw the kind of money the  film has made."

(The above story first appeared on LatestLY on Nov 19, 2020 06:14 PM IST. For more news and updates on politics, world, sports, entertainment and lifestyle, log on to our website latestly.com).