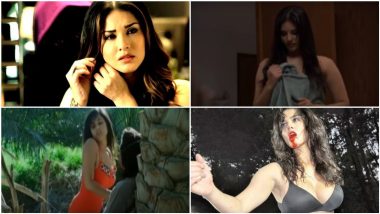 Now you might remember Ragini MMS 2 for the "Baby Doll" song and its horrex ("horror+sex") formula. This was also Sunny Leone's first horror film, thus making her a legit Scream Queen, later appearing as a cameo in the sequel series Ragini MMS Returns. But this franchise is not her only horror quotient.

On the occasion of Sunny Leone's birthday, we look at her more obscure Scream Queen appearances that you probably missed!

Do you remember Sunny Leone appearing in a special episode of the SET show Aahat? She played an actress named Leila who finds herself stalked by a Freddy Krueger like entity in the reboot take of the iconic horror series. Sunny Leone Birthday Special: A Versatile Style Capsule of Her Chic, Glamorous and Ethno-Cool Moments From Homegrown Labels!

I Eat Your Skin

This 2019 Australian horror film feels more like a movie shot on hand-held camera with some very bad acting. Here's what the IMDB premise reads for the film - "A group of international photographers journey to photograph a rare bird in the Philippines. When one of them finds a corpse clutching a strange talisman, he becomes host to a vengeful spirit and begins to prey on his fellow travelers." But there is an even bizarre story about this. This movie is a recycled version of an old adult movie of the actress called Black Shama, that was made even before Leone entered Bollywood!

An Indo-American production, this horror adventure thriller has a mix of Indian and American actors, and is about a vengeful pirate's ghost and a treasure trail. Sunny Leone is one of the treasure seekers, and the movie sees her getting stripped a couple of times, trying to seduce her disinterested partner and then killed by a zombie.

A pretty B-grade creature flick the genre which we usually watch downing a few beers, Mega Scorpions is about a bunch of scorpions who grow monstrously big and kill a bunch of humans. Sunny Leone appears towards the rear end of the film, in the epilogue and she doesn't last really long. Credited in IMDB as 'Hot Tub Hussy', her brief appearance involves appearing in a towel, disrobing herself to appear nude and then get killed brutally by a scorpion.

(The above story first appeared on LatestLY on May 13, 2021 10:11 AM IST. For more news and updates on politics, world, sports, entertainment and lifestyle, log on to our website latestly.com).