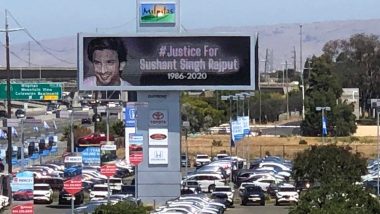 While sharing the post, Shweta Singh Kirti wrote, “Bhai’s Billboard in California...It’s up on 880 north, right after the great mall parkway exit. It’s a world wide movement. #warriors4ssr #justiceforsushantsinghrajput #worldforsushant @itsSSR”. There are several twists and turns in Sushant’s death case, but his family is hoping that justice will be served and the culprits behind this crime will be punished. Sushant Singh Rajput Death Case: Supreme Court to Hear Rhea Chakraborty’s Petition Seeking Transfer of FIR from Patna to Mumbai On August 11.

Sushant Singh Rajput’s father KK Singh had filed an FIR at Patna accusing Rhea Chakraborty that she abetted his son to commit suicide. She has also been accused of theft and mentally harassing him. The investigation case is underway and CBI has registered an FIR against Rhea and her family.

(The above story first appeared on LatestLY on Aug 08, 2020 02:55 PM IST. For more news and updates on politics, world, sports, entertainment and lifestyle, log on to our website latestly.com).