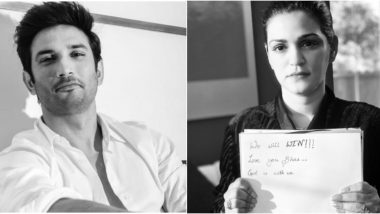 Sushant Singh Rajput's death case was recently handed over to CBI after Center approved Bihar government's plea to transfer the investigation. The popular Bollywood actor died by suicide on June 14 and in the wake of his death, several conspiracy theories began to do the rounds. The case got murkier after the late actor's father filed an FIR against his girlfriend Rhea Chakraborty charging her for theft and cheating. The CBI investigation has now begun and Rhea Chakraborty and her family were summoned for questioning at Enforcement Directorate office in Mumbai. In response to the same, Sushant Singh Rajput's sister recently shared a post about justice. Sushant Singh Rajput Case: ED Rejects Rhea Chakraborty’s Request for Postponing the Probe; Actress and Her Brother Being Inquired at Mumbai Office.

Sushant's sister Shweta Singh Kirti took to Instagram to share a picture of herself, holding a placard that reads, "We Will Win. Love You Bhai. God is with us." Sharing the post, she captioned it as, "We will get justice... we will find the truth!! #warriors4ssr #justiceforsushantsinghrajput." This post comes after Rhea Chakraborty recently left the Enforcement Directorate office after over eight hours of questioning. Sushant Singh Rajput Case: Bihar Govt Tells Supreme Court That Rhea Chakraborty Over-Dosed Late Actor with Drugs and Used His Wealth.

Fans came in support of Sushant's sister and left encouraging comments of her post referring to getting justice in Sushant's death case. Apart from Rhea and her family, SSR's house manager Samuel Miranda, Sushant’s CA and Rhea’s CA were all questioned by the ED early this week.

(The above story first appeared on LatestLY on Aug 07, 2020 11:39 PM IST. For more news and updates on politics, world, sports, entertainment and lifestyle, log on to our website latestly.com).