This Pardes Song Fooled You Into Thinking Shah Rukh Khan Was Present In Every Frame; Subhash Ghai Spills The Beans!

Shah Rukh Khan and his duplicate were used in this famous song from Pardes - guess which? 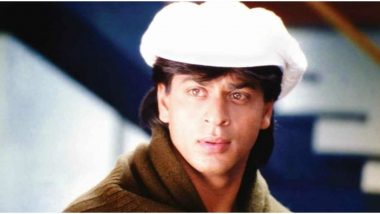 Subhash Ghai's Pardes will always hold a special place in our hearts. The song 'Yeh Mera India' is a must-have in the list of favourite patriotic songs of all time. But Sonu Nigam's Yeh Dil Deewana would probably take the honour for being the most popular song from the film's music album. It perfectly echoed Arjun's heartbreak and his struggle to deal with it. But did you know Shah Rukh Khan didn't shoot the entire song? He wasn't present for all the shots and the director had to use his duplicate for some of them. Shah Rukh Khan Gives a Singing Performance During The 'I For India' Concert and It is Both Hilarious and Entertaining (Watch Video).

Subhash Ghai in his recent interaction with Bollywood Hungama revealed why SRK was missing during the shooting of this song and why he had to eventually call in for a duplicate to complete its shooting. "We kept this song for the last. We had two days left. Shah Rukh Khan was cooperative throughout the movie but towards the end, he had to leave two days before because I think Gauri was probably pregnant. He said that he needs to go to Delhi and cannot extend for another 2-3 days," Ghai explained.

Check Out his Interaction

Owing to SRK's busy schedule, the director decided to shoot the song in one and a half days. “I asked him to come at 7 in the morning and the car was ready and I asked him to just give three close up shots. I picturised the song in 2 hours that morning. If you see, the song has various locations and not just one. All the longshots of the car were taken with Shah Rukh’s duplicate. Shah Rukh had only given closeups," Ghai elaborated further. Kajol Reveals the One Thing She Likes the Most About Shah Rukh Khan (Read Deets).

Well, clearly we weren't aware of this story and now when we look at the video, we may find some inconsistencies but who cares?

(The above story first appeared on LatestLY on May 05, 2020 02:49 PM IST. For more news and updates on politics, world, sports, entertainment and lifestyle, log on to our website latestly.com).