A source has revealed to a leading daily that the makers of Tiger 3 have found the villain for the film and it is none other than Emraan Hashmi. 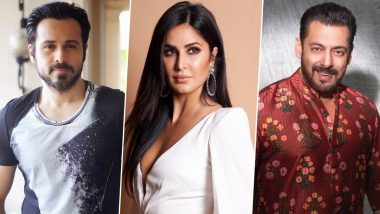 Salman Khan and Katrina Kaif, who have done numerous films together in the past, are all set to reunite once again for Maneesh Sharma’s film Tiger 3. This is the third installment in the Tiger franchise. Both Ek Tha Tiger and Tiger Zinda Hai had turned out to be commercially successful and hence the expectations are sky-high from this upcoming action entertainer. And now the latest buzz is about the film’s antagonist. Tiger 3: Shooting Of Salman Khan And Katrina Kaif’s Next Film To Commence From March 2021?

A source has revealed to TOI that the makers of Tiger 3 have found the villain for the film and it is none other than Emraan Hashmi. Yes, the report states that Emraan would be seen as playing the baddie in this Katrina Kaif and Salman Khan starrer. The source was quoted as saying, “YRF felt that Emraan fits the role as a T. He is a fine, intense actor and that quality won him the role.” Earlier it was said that the makers of Tiger 3 are looking out for a fresh face to essay the negative character. Well, nothing can be confirmed until the official announcement is made. Tiger 3: Makers Of Salman Khan And Katrina Kaif Starrer To Shoot The Film In Istanbul And Not In UAE?

Talking about the shoot of Tiger 3, reports are doing rounds citing that it would commence from March. It was recently reported that producer Aditya Chopra wants to begin the shoot as per the schedule and along with team, he is planning to head to Istanbul first as the number of coronavirus cases in the UAE have spiked. Keep watching this space for further updates!

(The above story first appeared on LatestLY on Feb 12, 2021 09:02 AM IST. For more news and updates on politics, world, sports, entertainment and lifestyle, log on to our website latestly.com).