Tiger 3: Shooting Of Salman Khan And Katrina Kaif’s Next Film To Commence From March 2021?

Salman Khan and Katrina Kaif are teaming up once again for the third installment in the Tiger franchise after After Ek Tha Tiger and Tiger Zinda Hai. 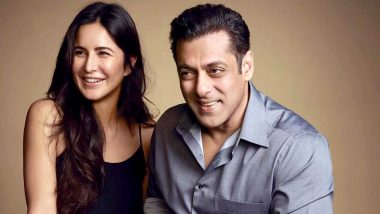 Salman Khan and Katrina Kaif are one of the most loved onscreen pairs and the duo is teaming up once again for Tiger 3, the third installment in the Tiger franchise after After Ek Tha Tiger and Tiger Zinda Hai. This would also be Salman and Katrina’s ninth film together and fans are pretty thrilled about this collaboration. And the latest buzz is Salman and Katrina would start shooting for this action drama from March 2021. Salman Khan Has a Very Basic But Beautiful Birthday Wish for Katrina Kaif!

The shooting of Tiger 3 will take place in Mumbai as well as in international locations. Ek Tha Tiger and Tiger Zinda Hai, both the films were shot at exotic locations and same would be followed for Tiger 3, keeping in mind the current situation owing to the pandemic. According to a report in ETimes, the first schedule of the film is expected to take place in Mumbai around the third week of March. The second and third schedule is expected to happen in the Middle East and back again in Mumbai, respectively.

Tiger 3 is said to be mounted on a lavish scale as compared to the earlier two films. Talking about the antagonist in this Maneesh Sharma directorial, the makers want to cast a fresh face for the film and that is yet to be decided. About the film’s title the source was quoted as saying, “It is not pucca that Tiger 3 will remain the film’s title, but in all probability it will not be changed. On date, it’s a working title.” Stay tuned for more updates from the world of entertainment!

(The above story first appeared on LatestLY on Dec 24, 2020 12:43 PM IST. For more news and updates on politics, world, sports, entertainment and lifestyle, log on to our website latestly.com).