Vicky Kaushal CONFIRMS His Break Up With Harleen Sethi, Says He Is Single and Ready to 'Mingle' 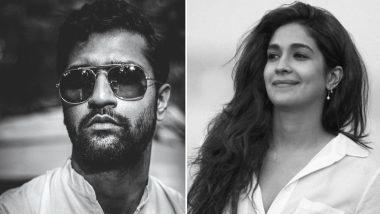 Vicky Kaushal is undoubtedly one of the hottest hunks in the B-town and many are crushing over him. The reports of him dating actress Harleen Sethi broke a few hearts but everyone was rooting for their relationship. However, here comes the news that the dup has broken up with each other and these are not just the speculations! The Uri actor himself confirmed the same saying he is single and ready to mingle, with the audience! When Vicky Confessed His Love For Harleen.

In a recent interview, he said, “Hanji, ekdum single hoon abhi, dekho... akela. Ready to mingle on stage with the audience.” That’s that. The actor now is totally single and is all set to give his best to the fans through his movies.

The rumours of their break-up started floating on social media since Harleen unfollowed Vicky on Instagram, while he still follows her. There were also reports that his apparent growing closeness with his Takht co-star, Bhumi Pednekar fueled this separation. Harleen reportedly did not like the growing closeness between both these actors triggering the breakup.

Speaking of films, Vicky is getting all kind of positive response for his roles in Sanju and Raazi at the award ceremonies. He also won the style award, clearly making one of the most desirable actors in the industry. With so much happening in his professional life, this blow in his personal life is indeed sad. The fans will always hope for them to get together and ship for them! Rest, the time will tell.

(The above story first appeared on LatestLY on Apr 03, 2019 11:18 AM IST. For more news and updates on politics, world, sports, entertainment and lifestyle, log on to our website latestly.com).