Vivek Oberoi Birthday Special: From Chandru To PM Narendra Modi - 7 Popular Roles Of The Actor We Love To Watch

On his birthday today, let us discuss some of the popular roles of Vivek Oberoi that we love to watch. 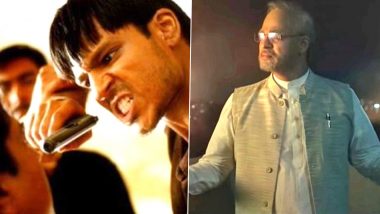 Vivek Oberoi's steady rise was abruptly halted by a scandal. It took him some time to create his place in the industry once again and given the fact that he has the talent, there have been many opportunities where the man shined. While we still remember him as a fiery young gangster in Company, we yearn to have a man with Aditya's innocent romance from Saathiya. He began his career in Ram Gopal Varma's grungy movie but became more famous as a lover boy thanks to his consecutive releases.  Vivek Oberoi Wishes Good Health to Aishwarya Rai Bachchan and Her Family After They Test Positive For COVID-19 (View Tweets)

On his birthday today, let us discuss some of the popular roles of Vivek Oberoi that we love to watch.

He is angry, he is wild and he is young, Vivek Oberoi's debut film was unlike anything anybody would expect. Everyone desires to debut as a romantic hero for surefire gains but Vivek turned into a gun-totting don. That worked perfectly for him as he was introduced to the masses as an actor rather than a hero.

Who would mind an Aditya Sehgal going to extreme lengths to find a medical student he met at a wedding? Saathiya was a big contrast to what he did in Company where he was rowdy. Vivek was extremely lovable!

Vivek goes from being a tamed domesticated husband to a man with roving eyes until it blows up on his face. Vivek's comic timing is quite precise in the film which added a dimension to his performances thereafter.

Omkara is a vicious movie of jealousy, greed and power. Vivek played the role of the youngest of the lot who gets a lot of attention. He did get our attention too!

Playing a Bhai comes easy to him as he began his career as one in movies. So getting into Maya Dolas' shoes wasn't difficult. However, he did go for added notoriety and villainy.

A formidable villain for a superhero...a villain who uses his brain to do everything as he is otherwise paralysed. Complete with a calm yet sinister look and an army of mutants, Oberoi was too good as the bad man.

Playing the titular character in a biopic on a living person is a huge risk. It escalates further when you are emulating the most popular Indian Prime Minister, Mr. Narendra Modi. We have to give it to Oberoi for holding his ground and doing the job earnestly.

(The above story first appeared on LatestLY on Sep 03, 2020 08:20 AM IST. For more news and updates on politics, world, sports, entertainment and lifestyle, log on to our website latestly.com).