July 2 is celebrated worldwide by fans of ufology as the World UFO Day. For the uninitiated, UFO is the acronym for Unidentified Flying Objects. In this special feature, we will look at the rare times when Hindi cinema attempted to bring UFO's to our screens. 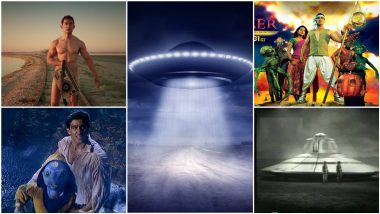 July 2 is celebrated worldwide by fans of ufology as the World UFO Day. For the uninitiated, UFO is the acronym for Unidentified Flying Objects. It doesn't mean spaceships or alien craft in general, but any flying objects, that includes animals and birds, that aren't identified by science as we know it. So whether you have the time, do look out in the sky today. Who knows, you might be lucky enough to see one. World UFO Day 2021: Books on UFOs & Aliens to Satiate Your Curiosity About Extra-Terrestrial Beings.

Aliens and UFO's have been a favourite trope when it comes to Hollywood. From The Day The Earth Stood Still to ET to Avengers: Endgame, West has seen many movies that have spacecraft in various shapes, sizes and intentions. When it comes to Bollywood, though, the industry has been set back by lack of budgets and vision.

That doesn't mean Bollywood hasn't tried. In this special feature, we will look at the rare times when Hindi cinema attempted to bring UFO's to our screens.

The film that first comes to our mind is definitely Rakesh Roshan's Koi Mil Gaya..., starring his son Hrithik Roshan in the lead. Which, you might be knowing by now, is heavily influenced by ET (more on this later). Despite the inspiration, Koi Mil Gaya... was a huge hit, and spawned a franchise. The puppet-like alien Jadoo also become an iconic character. While the film is not exactly passing the test of time, the scene when the spaceship arrives on Earth is terrifically shot, with the right amount of tension created, both in terms of lighting and BG score. Exclusive! Hrithik Roshan's 'Krrish 4' Is Getting Delayed By A Year; Special Effects To Create Triple Roles for The Superstar to Be Blamed?

PK is one of the highest grossing films in Bollywood, that uses a naive alien to expose the superstitions imbibed in our culture. In the beginning, Aamir Khan's alien character lands on Earth, completely nude, and is left stranded when it leaves without him. Just like Jadoo. The spaceship arrives later in the climax to pick up PK and also in the epilogue when we get that Ranbir Kapoor cameo.

Even Akshay Kumar and Sonakshi Sinha attempted to play with the extra-terrestrials in Shirish Kunder's Joker. Unlike the other two films, Joker was critical and a commercial failure. The movie has Akshay's NRI character return to his village to find that the administrators are not taking care of it. To bring their attention to the village's welfare, he uses the villagers to create the impression that their village is a frequent visiting ground for aliens. Towards the end, the real aliens arrive much to the surprise of all.

Also, there is this 2010 romcom, directed by Milap Zaveri (before he got into making sex comedies and masala actioners) that had Jacqueline Fernandez as an alien who comes to Earth on a spaceship and seeks the help of Riteish Deshmukh's character to help her find love.

But years before the likes of Koi Mil Gaya..., PK and Joker arrived, we had a tryst with Martians and their spacecraft in the 1967 film Wahan Ke Log, that starred Tanuja in the lead.

Before we end this feature, let's go back to our promise of talking about Steven Spielberg's ET. Like did you know that the great Satyajit Ray was supposed to make his Hollywood movie about aliens and spaceships, that ultimately didn't happen. It is said that some of his designs were inspiration for the 1984 Steven Spielberg classic.

(The above story first appeared on LatestLY on Jul 02, 2021 09:31 AM IST. For more news and updates on politics, world, sports, entertainment and lifestyle, log on to our website latestly.com).