Zareen has always been admired for her beauty, but with the increase of the usage of social media, the actress also started becoming a target of trolls quite often. Zareen was trolled for her weight gain quite often. 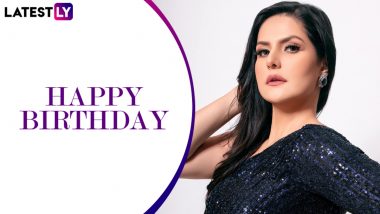 Zareen Khan entered Bollywood on the basis of her talent, and has made a name for herself in the industry. She has worked with bigwigs like Salman Khan in films, and has a huge fan following as well. The actress marked her debut with Salman's Veer in 2010, and went on to do films like Ready, Housefull 2, Hate Story 3, Aksar 2, and the recently released Hum Bhi Akele Tum Bhi Akele. She has also appeared in Tamil, Telugu and Punjabi films in key roles. Hum Bhi Akele Tum Bhi Akele: Zareen Khan Opens Up About Playing a Gay Character in the Disney+ Hotstar Film.

Zareen has always been admired for her beauty, but with the increase of the usage of social media, the actress also started becoming a target of trolls quite often. Zareen was trolled for her weight gain, where many have body-shamed her to a great extent. The actress, however, did not pay any heed to these trolls. She always made sure she gives it back to the people who are commenting about her weight amongst other things, and shut them completely.

Today, as the actress is celebrating her34th birthday, we are taking a look at 5 times she shut these trolls with her savage replies. Take a look:

Social Media is a Curse

Talking to  ETimes, the actress had once opened up about social media trolls and said, "Well, social media is a curse as much as it is an advantage. Unfortunately and sadly some people, rather than showering their favourite celebrity with love,  just write nonsense. I think these are the ones who are frustrated with their lives and because they can’t raise their voice wherever they are, they come and remove their frustration on social media under faceless usernames. Why would you take these people seriously?"

Zareen was once trolled for posting a picture where she was flaunting her stretch marks. She replied to a troll saying, "For people who are very curious to know about what’s wrong with my stomach, this is the natural stomach of a person, who has lost 50 kgs of weight, this is how it looks when it is not photoshopped or surgically corrected. I’ve always been someone who believes in being real and embraced my imperfections with pride rather than covering it up."

In an interview with Mumbai Mirror, Khan gave a befitting reply to people who body-shamed her.  "I didn’t feel the need to use them (photo editing app) because I don’t believe in hiding my imperfections. As a teenager, I weighed over 100 kg and when you lose 50 kilos, your skin tends to get loose and leave stretch marks. I’m proud of what I have achieved. It’s not about becoming picture-perfect for people but for myself," said Zareen. Anushka Sharma Comes in Support of Zareen Khan After She Gets Body-Shamed: 'You're Perfect'.

While many people have trolled Zareen for one thing or another, Zareen is all about self-love. She had once shared a throwback picture of herself on Instagram from her school and college days. She wrote a heartfelt message on body shaming and said, "Came across these pics of mine from school and college days. (White one was in std 9th & pink one was right after my std 12th exams). When I look at these pics I feel proud of myself today not that I felt any lesser abt myself back then. In spite of being so big, I never let ppl's comments or ideas abt me bother me. Bcoz it's my life and my body and only I have the right to decide what I'm gonna do with it."

Zareen has always been vocal about her struggle with being overweight as a student. She likes to share her experience with her fans to normalise this issue. She posted a picture once and talked about her fight with being heavyweight in school. Talking to IANS about the same topic, she revealed, "It didn't bother me then and doesn't bother me now. I have always been extremely strong-willed and will never shy away from talking about how I feel. I am very grateful to the people who have supported me through my journey and the ones who haven't, have only made me stronger."

Zareen Khan is truly an inspiration and we love the fact that she is all about the self-love. Join us in wishing her a very happy birthday.

(The above story first appeared on LatestLY on May 13, 2021 08:10 AM IST. For more news and updates on politics, world, sports, entertainment and lifestyle, log on to our website latestly.com).