Amazon Prime Video has listed its top movies list that ranges from Allu Arjun’s Pushpa to Mohit Chadda’s Flight and many others. Here's looking at the 10 movies featured on the streaming giant's top movies list. 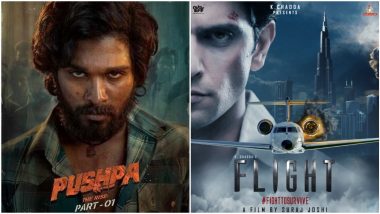 It was always a thrill to watch first day first show in theatres or watch a film over the weekend in cinema halls with your loved ones. But this culture of watching films on the big screen affected ever since the pandemic has hit. The theatrical releases of films had to be stalled in order to control the growing of number coronavirus cases. And then we saw movies getting premiered on OTT platforms. There have been several films, be it Bollywood, Hollywood or any other regional films, it has been directly streamed online. But again, 2021 saw some theatrical releases and it was a magical experience for the audience. Allu Arjun's Pushpa: The Rise Part One's Hindi Dubbed Version to Premiere on Amazon Prime Video on January 14.

2022 is again witnessing a spike in COVID-19 cases and also the Omicron variant. Some of the states have decided to shut down cinema halls, whilst some are functioning with 50% capacity and adhering to other guidelines as well. Owing to the ongoing situation, there is a growing reluctance among movie buffs about heading to the theatres. Many are opting to stay back at home and watch some of the top movies on streaming giants. Well, Amazon Prime Video has listed its top movies list that ranges from Allu Arjun’s Pushpa to Mohit Chadda’s Flight and many others. We list down the 10 films that you could watch with your loved ones by staying at home. Flight: Mohit Chadda’s Thriller Streaming Now On BookMyShow, Here’s How You Can Buy or Rent the Film!

Allu Arjun, Fahadh Faasil and Rashmika Mandanna starrer has become a huge hit in all languages. The film directed by Sukumar features Allu Arjun in the titular role.

The crime drama, written and directed by Vasanthabalan, features GV Prakash Kumar as Karuna, a youngster who engages in minor crimes.

The Malayalam film stars Kunchacko Boban in the lead. It revolves around the life of villagers dealing with age old pathway and Bheeman comes forward to resolve the issue.

Daniel Radcliffe, Emma Watson and others from the cast of Harry Potter film series reunited to celebrate the anniversary of the first film.

The George Clooney directorial is an adaptation of the 2005 memoir of the same name by JR Moehringer. The film stars Ben Affleck and Tye Sheridan in the lead.

The James Gunn’s film is a standalone sequel to the 2016 released Suicide Squad and the tenth film in the DCEU. It stars Margot Robbie, Idris Elba, John Cena, Joel Kinnaman, Sylvester Stallone, Viola Davis among others.

The Conjuring: The Devil Made Me Do It

Michael Chaves’s film served as a sequel to The Conjuring and The Conjuring 2. The Patrick Wilson and Vera Farmiga-starrer is the eighth installment in the Conjuring Universe.

Starring Diljit Dosanjh, Sonam Bajwa and Shehnaaz Gill, this Punjabi rom-com marked the debut of Dosanjh as a producer.

Suraj Joshi’s film starred Mohit Chadda in the lead as Ranveer Malhotra who against all odds has to face deadly obstacles on a plane for survival.

These are the 10 films listed on Amazon Prime Video’s top movies list!

(The above story first appeared on LatestLY on Jan 20, 2022 03:43 PM IST. For more news and updates on politics, world, sports, entertainment and lifestyle, log on to our website latestly.com).