Bradd Pitt is all set to star as an astronaut in the upcoming James Gray directorial Ad Astra. The film's reviews are now out and it looks like the space film has left everyone impressed with its great visual appeal. Check out what critics had to say about Pitt's performance in the film. 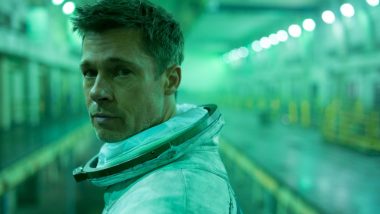 Space films are incredibly common in Hollywood and Ad Astra is the latest offering. The film starring Brad Pitt is the actor's first-ever space film and stars him in the role of an astronaut who heads out to space to look for his father, played by Tommy Lee Jones. The film is a mix of classic space drama thrills along with an emotional story of father-son relationship. Pitt was recently seen in Quentin Tarantino's Once Upon A Time in Hollywood won a lot of praises for his character in the film as that of a stunt double for Leonardo DiCaprio's character. After Once Upon A Time in Hollywood's Cannes 2019 premiere, Pitt's upcoming film Ad Astra was recently premiered at Venice Film Festival where it received favourable reviews. Ad Astra Trailer: Brad Pitt Heads Out to Space to Search for His Missing Father in This Visual Spectacle – Watch Video.

The film has been directed by James Gray whose 2016 film, The Lost City of Z was hailed by the critics. Apart from Pitt, Ad Astra also stars Ruth Negga, Liv Tyler, Donald Sutherland and Jamie Kennedy in key roles. Overall, the responses for the film have been positive and looks like Pitt is enjoying a good year with back to back successes.

Deadline in their review for Ad Astra wrote, "Gorgeously shot by cinematographer Hoyte van Hoytema, with spectacular effects and production design and a great moody score by Max Richter, this is a movie made to be seen in Imax, or the widest screen possible, to engulf you in its own cerebral world — more reminiscent of 2001: A Space Odyssey than Star Wars, just to give you a clue. This is far more character-driven and introspective, but its themes and approach echo film classics from John Ford’s The Searchers to Apocalypse Now, and even the father-son dynamic that was so movingly a part of Field of Dreams, all movies in which our key player in on a mission that takes detours beyond what you might normally expect from big-budget Hollywood movies.". Ad Astra: Brad Pitt Starrer's New Poster Reminds Us of These Space Films!

Rolling Stone called the film "enthralling" and wrote, "Playing a spacebound stoic who refuses to wear his emotions on his sleeve can keep an audience at a distance — see Ryan Gosling as Neil Armstrong in First Man — but Pitt avoids that trap. His scenes with Jones, who can do more with a squint that most actors with pages of dialogue, never push for effect but achieve a wrenching power. Yes, you’ve heard this tale before. But Gray tells it with a grand scope and intimate sense of empathy that is nothing less than enthralling."

The Verge wrote, "Ad Astra will work best for viewers who either don’t care whether its visual wonders contain a compelling story, or those who are willing to project their own emotional profundity onto the material. In the end, however, Ad Astra offers little more than ponderous vagueness masquerading as depth."

There's no denying that the film's visual appeal is high and has left the critics impressed. The film's emotional content though may not bode well with everyone, especially those who are hoping to watch a sci-fi film. Ad Astra releases in India on September 20.

(The above story first appeared on LatestLY on Sep 18, 2019 05:48 PM IST. For more news and updates on politics, world, sports, entertainment and lifestyle, log on to our website latestly.com).