BTS Reveal Their Dream Collaboration Would Be Brad Pitt and Fans Hope the Once Upon A Time in Hollywood Star is Listening!

Recently, BTS did a live Q&A session for the iHeartRadio program in Los Angeles and revealed an interesting detail about their collab wishlist. 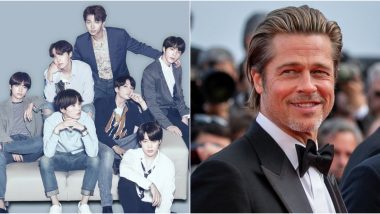 BTS may not have won a Grammy this year but as always, they won everyone's hearts with their performance on "Seoul Town Road" with Li Nas X at the coveted award ceremony that took place in Los Angeles on Sunday, January 26. The K-Pop band are a worldwide sensation and ever since their Grammys performance and also the amazing picture in which they posed with Ariana Grande went viral, fans have been talking about the chances of them collaborating with American artists. Recently, BTS did a live Q&A session for the iHeartRadio program in Los Angeles and revealed an interesting detail about their collab wishlist. Lil Nas X and BTS Debut At Grammy Awards 2020 With a Spectacular Performance on 'Seoul' Town Road (Watch Video).

Speaking about their dream collaborations, the band did mention a few expected names like Ariana Grande and Post Malone but it is the third name that got not just their fans but us excited too. Whilst revealing their wishlist, Jin once again showed how big a Brad Pitt fan he is as he named the actor for his dream collab. Hearing this, the crowd went wild during the live session. BTS At Grammys 2020: From Boy With Luv to Mic Drop, 5 Songs That the K-Pop Hotties Should Perform at the 62nd Annual Grammy Awards!

Check Out Jin Talking About Collab With Brad Pitt:

Q: who would you most want to collab with?

you hear that #BradPitt ??? jin wants to collab. funny how y’all think he’s joking but just wait and he’ll be starring in a movie with brad pitt deadass #bts #iHeartBTS pic.twitter.com/gsCikIDgWQ

Get Jin a Role in a Brad Pitt Film!

Can we please make this happen? My boy loves Brad Pitt, he needs a role in the next Brad Pitt movie! With Seokjin in the movie it will be a guaranteed hit!! 🍿🎬🎭 #BTSJIN #SEOKJIN #JIN #worldwidehandsome #BradPitt #BTS #actorjin @BTS_twt https://t.co/IAZUE3V7Tm

In a 2017 interview with Access Hollywood, Jin created an iconic moment when he named Brad Pitt as his “Hollywood crush” and well, looks like this crush is still going strong. Well, let's hope Pitt is listening. While RM joked about Jin's answer and said laughingly, "He’s gonna shoot a movie", we bet ARMY is already dreaming about seeing Pitt along with BTS in a fun video!

(The above story first appeared on LatestLY on Jan 28, 2020 10:50 PM IST. For more news and updates on politics, world, sports, entertainment and lifestyle, log on to our website latestly.com).