Eternals is helmed by Oscar-winning director Chloé Zhao. The expectations from the film were sky-rocketing, however, it has opened to mixed reviews from critics. 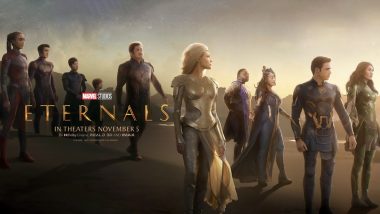 Eternals bankrolled under the production giant Marvel Studios will be released as part of Phase Four of the Marvel Cinematic Universe. The film’s screenplay has been written by Chloé Zhao, Patrick Burleigh, Ryan Firpo and Kaz Firpo. Let’s take a look at some of the reviews shared by critics on Eternals. Eternals Post-Credit Scenes Spoilt on Reddit? Marvel’s New Superhero Film Could Be the Latest Victim to Pre-Release Leaks!

The Guardian - Everything about Eternals is huge, which is both its strength and its weakness. In terms of visual spectacle, it gives us cosmic vistas that would not look out of place on a prog-rock album cover or a documentary about the Big Bang. Along with the epic scope comes an equally huge, and refreshingly diverse, cast of characters. If you’re lost already, bad luck: there’s plenty more to come, which demands some planet-sized chunks of exposition. At times if feels like you are watching a very sophisticated PowerPoint presentation.

Polygon - The film’s cast is too big to give every character a fulfilling arc, but the film’s script by Zhao, Patrick Burleigh, Ryan Firpo, and Kaz Firpo devotes most of the film’s runtime to its least compelling characters.

Culture - Eternals is adapted from a series of far-out 1970s comics by the great Jack Kirby, and traces remain of his visionary design, but Zhao and her three co-writers have weighed it down with lots of rudimentary dialogue, a daft plan – "If we can assemble device X and attach it to device Y then we can defeat enemy Z" – and a standard CGI-heavy showdown to round things off.

IGN India - Eternals is sprawling — across scenery, across centuries, you name it. Director Chloé Zhao’s immortal epic dances across timelines and alliances with ease. Though, despite the spectacle of it all, the latest Marvel film falls victim to the old “just because you can doesn’t mean you should” in some areas.

Empire - There’s a fascinating tension in Eternals between the unstoppable force of the Marvel project and the immovable object of Zhao’s artistic sensibilities. In many ways, this looks and feels nothing like any Chloé Zhao film we’ve seen before.

South China Morning Post - There’s plenty of back-and-forth to earlier time periods, including a striking shot of 1945 Hiroshima after the atomic bomb had been dropped. But at over two-and-a-half hours, the film struggles to find its rhythm, weighed down by the onus of carrying so many central characters.

USA Today - Zhao understands the larger assignment, as the epic sets the stage for future MCU intrigue. Her attention to detail and eye for design does wonders, even if by the end it all feels like an eternal chore.

So that’s what critics have to say about Eternals. The film is all set to be released in many European countries on November 3 and in the US, India and UK on November 5.

(The above story first appeared on LatestLY on Oct 25, 2021 04:39 PM IST. For more news and updates on politics, world, sports, entertainment and lifestyle, log on to our website latestly.com).