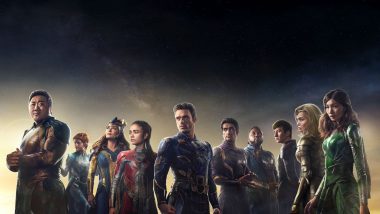 Eternals is still a month away from release, but Marvel’s next cosmic adventure just wrapped up its red carpet premiere. Focusing on a group of immortals brought down to Earth to protect the human race from Deviants, Eternals is shaping up to be quite the spectacle. Directed by recent Oscar winner Chloe Zhao and having an all-star cast, fans have been excited for Eternals as they clamor for every bit of Marvel content they can get. Eternals: Angelina Jolie, Richard Madden, Kit Harington’s Marvel Film Is EPIC As Per Early Non-Spoiler Reactions!

With the premiere of Eternals, so is tradition in Hollywood that leaks are going to appear. According to a detailed Reddit post on the subreddit r/MarvelStudiosSpoilers, we have our hands at the entire plot leak for the Chloe Zhao directed film. Although now we won’t be focusing on that, but rather the mid and post-credits scenes. If you want to read the entire plot leaks, then you can do so by clicking here.

“The two end credit stingers: 1) Dane is looking at an old box and pulls out a sword that is wrapped up. Just as he is about to touch it, an off screen voice stops him. 2) On the Eternals' ship, Pip the Troll appears and introduces Starfox.”

So it looks like Dane Whitman finds his iconic sword and just as he is going to become Black Knight, he is stopped by someone off screen. If there ever is a sequel to Eternals then we might actually see Black Knight in action, so this sets him up really well.

In the post-credits it looks like Pip the Troll appears alongside Starfox, which is quite interesting. In the comic Pip the Troll was introduced as a character appearing in Adam Warlock’s comics, so it looks like it might set up Warlock here. Starfox is another interesting character whose real name is Eros of Titan. Sounds familiar? That’s because it is. He is the brother of Thanos, and here is another stinger, according to early reports from the screening he is being played by Harry Styles. Eternals: Harry Styles Is Part of This Marvel Film, Plays the Role of Thanos' Brother - Reports.

If true, then the future of the Marvel Cinematic Universe is looking quite great right now as more and more characters are being introduced. Eternals directed by Chloe Zhao is scheduled to release on November 5, 2021.

(The above story first appeared on LatestLY on Oct 19, 2021 08:21 PM IST. For more news and updates on politics, world, sports, entertainment and lifestyle, log on to our website latestly.com).