With Swift, Vincent and Antonoff and mentions having been dropped from the Grammys' 'Sour' credits, that album now has the second-shortest list of nominated songwriters among the 10 album of the year nominees: It's just Rodrigo, her regular collaborator Daniel Nigro and Casey Smith. 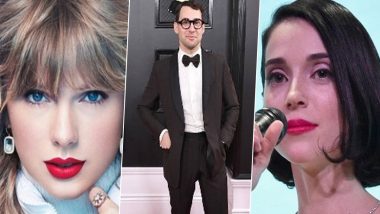 Singers Taylor Swift and St. Vincent's names have been dropped as Grammy nominees for Olivia Rodrigo's 'Sour' interpolation. Swift was originally listed as a nominee for Rodrigo's album due to an interpolation on the latter artist's album, but the Recording Academy has now updated its list of nominees and excluded several names that previously were listed, reports variety.com. Grammy Awards 2022: Trevor Noah to Host the 64th Annual GRAMMY Awards on January 31.

Also no longer nominated for being part of Rodrigo's 'Sour' songwriting team in the nominations list are St. Vincent and Jack Antonoff. Those two and Swift together wrote 'Cruel Summer', a song from the 'Lover' album, which Rodrigo and her camp credited as an interpolation in the hit 'Deja Vu', even though it bore only the most modest similarity to the Swift album track. Grammy Awards 2022 Will Take Place at Los Angeles on January 31, Recording Academy Confirms.

In removing the nominations on Sunday, the Recording Academy said that its policy is not to include the writers of interpolated songs in nominations, and that it did so in the case of Rodrigo only because of a submission that incorrectly named Swift, Clark and Antonoff as full co-writers. "During the submission process, the Academy received credits from the label for the track 'Deju Vu'," the Academy said in a statement.

"Last week, we received the correct credits from the label that recognise Annie Clark, Jack Antonoff and Taylor Swift as songwriters of an interpolation on the track 'Deja Vu'. In keeping with current Grammy guidelines, as songwriters of an interpolated track, Clark, Antonoff and Swift are not nominees in the album of the year category for 'Sour'." That doesn't mean that any of the three are now shut out in the Grammy nominations.

As the Academy's statement goes on to point out: "Antonoff and Swift are nominated in the category for Swift's album, 'Evermore'." St. Vincent doesn't appear in the album of the year category, but is nominated for best alternative album for her 2021 release, 'Daddy's Home'. How does this ruling affect another group of songwriters that was credited for an interpolation on Rodrigo's 'Sour' album Paramore? Not at all, as Hayley Williams and her co-writers were never listed in the Grammy nomination for the Rodrigo release, even though they were credited similarly to how Swift and company were; apparently, the paperwork was submitted correctly on that one.

With Swift, Vincent and Antonoff and mentions having been dropped from the Grammys' 'Sour' credits, that album now has the second-shortest list of nominated songwriters among the 10 album of the year nominees: It's just Rodrigo, her regular collaborator Daniel Nigro and Casey Smith. They're slightly beat in that minimalism by Billie Eilish's 'Happier Than Ever' album, which lists only her and her brother Finneas as writers. Swift's 'Evermore' album also has a fairly spare five writers listed.

In contrast, Justin Bieber's 'Justice' album lists 73 songwriters as nominees. And rapper Kanye West's 'Donda' has Bieber's album slightly beat by listing 77 Grammy-eligible songwriters. The H.E.R. album has 51 nominated writers, while Doja Cat's has a modest 35 in line for a Grammy. The Recording Academy is keeping a page for updates and corrections to its nominations.

"This year, for the first time, we are making these updates public to ensure transparency and accessibility to the most up-to-date and accurate information," a statement on the updates page says. Some of these corrections involve adding additional contributors who weren't initially listed, or just making spelling fixes. But in one case this past week, it involved adding Linda Chorney back in as a nominee for best American roots song after her legitimately earned nomination was flagged for review and left out when the Grammy roster was first revealed.

(The above story first appeared on LatestLY on Dec 06, 2021 02:17 PM IST. For more news and updates on politics, world, sports, entertainment and lifestyle, log on to our website latestly.com).