JK Rowling Under Fire Over ‘Anti-trans’ Tweets; Netizens Unimpressed at Harry Potter Author’s Claim That Transgender Activism Is ‘Erasing the Concept of Sex’

In the viral tweets, the Harry Potter author has proclaimed that transgender activism is “erasing the concept of sex,” which she argued is harmful to women and lesbians. The tweets also caused ‘JK Rowling’ to trend on Twitter along with ‘JK Rowling is a TERF.’ 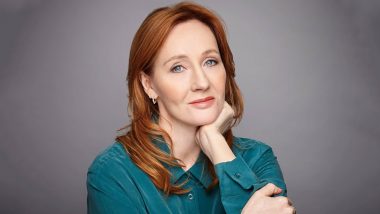 The author of Harry Potter and recently released, The Ickabog, JK Rowling, is under fire. The 54-year-old who has always identified herself as a feminist is under fire on Twitter over a series of tweets that netizens find anti-trans and transphobic. Her stance on how transgender women fit into her feminism beliefs has not been received well by netizens. In the viral tweets, the Harry Potter author has proclaimed that transgender activism is “erasing the concept of sex,” which she argued is harmful to women and lesbians. The tweets also caused ‘JK Rowling’ to trend on Twitter along with ‘JK Rowling is a TERF.’ In this article, we bring you down how Rowling’s tweets caused a stir on Twitter. J.K. Rowling Unveils ‘The Ickabog,’ Publishes First Two Chapters of Her New Book and Twitterati Can’t Keep Calm!

Rowling’s controversy began when she commented on an article from Devex—a platform for the worldwide development community, titled: “Opinion: Creating a more equal post-COVID-19 world for people who menstruate.” The author shared the article link with caption, “’People who menstruate.’ I’m sure there used to be a word for those people. Someone help me out. Wumben? Wimpund? Woomud?

‘People who menstruate.’ I’m sure there used to be a word for those people. Someone help me out. Wumben? Wimpund? Woomud?

The tweet immediately went viral on social media. People are calling Rowling’s comment ‘anti-trans’ and ‘transphobic’ as they pointed out that transgender people, non-binary people and gender-nonconforming people can also menstruate. In the follow-up tweets, Rowling criticised the idea that someone’s biological sense is not real. She hinted that trans people are ‘erasing the concept of sex’ attempting to justify her stance by using it to support ‘same-sex attraction.’

If sex isn’t real, there’s no same-sex attraction. If sex isn’t real, the lived reality of women globally is erased. I know and love trans people, but erasing the concept of sex removes the ability of many to meaningfully discuss their lives. It isn’t hate to speak the truth.

The idea that women like me, who’ve been empathetic to trans people for decades, feeling kinship because they’re vulnerable in the same way as women - ie, to male violence - ‘hate’ trans people because they think sex is real and has lived consequences - is a nonsense.

Her tweets seemingly ignore the difference between gender and sex, a difference that is backed by science and the existence of intersex individuals, who are born with reproductive or sexual anatomy, but does not fit the typical definitions of the female and male sex. Rowling added that she respects trans people’s right to live comfortably, but struck out at people calling her a TERF—Trans-Exclusionary Radical Feminist.

Her Tweets/ Opinions Are Not Well Received!

it’s not like she tweeted “I don’t think pineapple should be on pizza” Jon, she tweeted that trans women aren’t women. that’s not an “opinion” it’s transphobia and nobody should tolerate it

Sadly, they don’t need your empathy. They need you to use your platform to advocate for fair treatment and the upholding of their human rights. Instead you’ve chosen to stigmatised an already vulnerable minority during #PrideMonth. #TransRights #TransRightsAreHumanRights

GLAAD, an organisation for LGBTQ+ rights, stated that Rowling’s comments targeted trans people and the author aligned herself with an ideology which ‘distorted’ facts about gender identity and trans people.

JK Rowling continues to align herself with an ideology which willfully distorts facts about gender identity and people who are trans. In 2020, there is no excuse for targeting trans people.

Her series of tweets have come amid the June Pride Month 2020 celebration, which is significantly celebrated in the United States and by LGBTQ+ community across the world. This is not the first time that Rowling has drawn criticism on social media on her opinions on gender and sex. According to reports, last year in December, she faced backlash while supporting author, Maya Forstater, who was fired from a think tank for saying that men could not change into women.

(The above story first appeared on LatestLY on Jun 07, 2020 11:13 AM IST. For more news and updates on politics, world, sports, entertainment and lifestyle, log on to our website latestly.com).