Actress Salma Hayek plays the role of international con artist Sonia Kincaid in 'Hitman's Wife's Bodyguard' to be released in India on August 6. 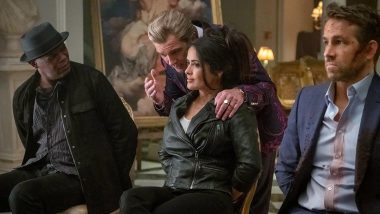 Actress Salma Hayek plays the role of international con artist Sonia Kincaid in 'Hitman's Wife's Bodyguard' to be released in India on August 6. Talking about her character in the film, Salma told IANS: "I love my character so very much. I'm so proud of creating her, she's crazy, but not randomly crazy. I was very specific about the choices I made. She's full of contradictions, but I had my own bible of how she thinks and those contradictions make sense to me." Hitman’s Wife’s Bodyguard: Salma Hayek Says She Was ‘Shocked’ When Asked to Reprise Her Role of Sonia Kincaid.

She added: "One of the things I love about her is her thought process - it's strange, but it's consistent in its strangeness. It's so much fun to do and I'm very grateful to Patrick for trusting me." 'Hitman's Wife's Bodyguard' is an American action comedy film directed by Patrick Hughes and written by Tom O'Connor and Brandon and Phillip Murphy. It's a sequel to the 2017 film 'The Hitman's Bodyguard'. Hitman’s Wife’s Bodyguard Trailer: Ryan Reynolds, Samuel L Jackson and Salma Hayek’s Action-Comedy Promises Popcorn Entertainment (Watch Video).

(The above story first appeared on LatestLY on Aug 05, 2021 07:23 PM IST. For more news and updates on politics, world, sports, entertainment and lifestyle, log on to our website latestly.com).