Park Seo-Joon is reportedly in talks to be part of Marvel's Captain Marvel 2 starring Brie Larson. While his agency is going with a 'No Comments' stance, we decided to make you aware of what a marvelous actor and looker this man. So, here're five Kdramas of the actor you must watch on Netflix to know why 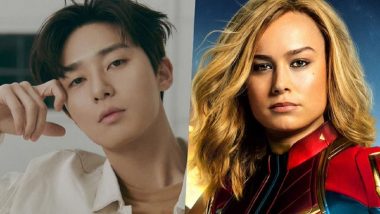 Rumours abound that Park Seo Joon is in talks to star in Marvel's Captain Marvel 2 which releases in 2022. While the actor's agency has decided to go with just 'No comments' in the context, fans of the actor are already celebrating. Park Seo Joon is one of the biggest South Korean actors. He has been part of several movies and dramas which have a great following. For those people, who aren't aware of this extremely talented and good-looking man, we got you covered. Here're five Kdramas of the actor on Netflix that you can binge-watch and figure out on your own what he is. Captain Marvel 2, Thor: Love and Thunder, Ironheart, Fantastic Four, I Am Groot – Marvel Studios Announces The Movies And TV Series Releases For Phase Four And Five

Warning: It could lead to you obsess over him at unhealthy levels, like us. Watch at your own risk!

This list had to begin with Itaewon Class. Anybody who thinks Kdramas are just about heart-fluttering moments put together with a chaebol (Rich) hero and a poor heroine, Itaewon Class is your antidote. Park Seo Joon plays an ex-convict who opens a bar restaurant to defeat the rival franchise run by the man who killed his father and led to his imprisonment. There are heart-fluttering moments here too but it's more about avenging yourself in a just way, come what may. His hairstyle notwithstanding, he is the Class in Itaewon Class!

Fight For My Way

Park Seo-Joon plays taekwondo martial arts guy who is quite termperamental. Where romance is one of the strongest elements in the drama, it's the underlying theme of how life gets into the way of achieving dreams, that makes you gravitate towards it. Seo Joon is brilliant as the sometimes cocky, sometimes unnerving and sometimes cute guy who toils hard to achieve his dream. This drama can easily give life lessons to all of us.

The BFF turned lovers trope is quite common in Kdramas but She Was Pretty is so much more. We all have weird beauty standards and feel obliged to judge situations on behalf of the other. Park Seo-Joon returns to Korea and is excited to meet his best friend but she decides to send her friend instead as she isn't confident about her looks. But then love finds the one it is in love with. The romantic moments do more than just make your hearts flutter.

Kill Me Heal Me

This is a series that should be watched by everyone all over the world. Despite being a bit caricaturish and loud, the kind of topic this series upholds deserves a lot of adulation. A rich businessman suffers from a severe case of Dissociative Identity Disorder and is helped by his girl. Park Seo Joon is a mystery novelist who likes to base his characters on these rich and famous. What makes Seo-Joon stand out here despite being the infamous 'second lead' is the range of emotions he portrays in every scene. In fact, we feel his character gets a better arc than the leads even and he delivers!

A Kdrama on a popular novel and webtoon by the same name, this is probably one of the weakest series of the actor but is nonetheless quite addictive. He plays a self-absorbed, narcissistic boss who gets a rude shock of his life when his trusted secretary decides to have a life by quitting her job. Seo-Joon was so good at portraying the self-adulation that it was obnoxious.

(The above story first appeared on LatestLY on Jun 16, 2021 12:29 PM IST. For more news and updates on politics, world, sports, entertainment and lifestyle, log on to our website latestly.com).